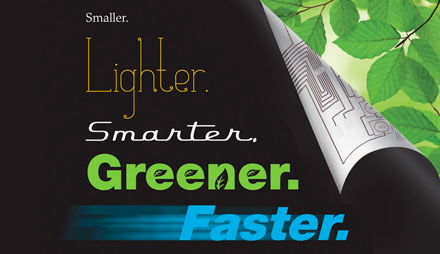 Small-scale systems make modern life easier. Did you use a cell phone today? Have you checked your e-mail? Maybe you’ve watched a video on a mobile device or tested your blood sugar. Without small-scale electronics, such conveniences would be nonexistent.

Small-scale systems are electronic systems with features built at the microscale or even smaller. “These are difficult to construct, but also extremely useful,” says Sammakia, a former IBM engineer who is also vice president for research at Binghamton. “When you can build electronic systems at that scale, you can put much more function in a much smaller volume and weight. So your phone now can do what a supercomputer could do three decades ago. That’s where scale becomes really important, when you can have more function in a smaller space at lower power.

“We decided to focus on small-scale systems because that’s where the future is.”

S3IP, established 10 years ago, builds on Binghamton’s Integrated Electronics Engineering Center (IEEC), founded in 1991. The IEEC focuses on electronics packaging. Since then, S3IP has added to its portfolio of research interests. It now boasts centers that address:

It also has three unique, multiuser laboratories that support this work:

An industry-driven quest for answers

The Integrated Electronics Engineering Center (IEEC) is where it all began, and electronics packaging remains at the core of S3IP’s activities. Those activities are driven by member companies, which provide faculty researchers an opportunity to tackle real-world problems and support their work financially. In turn, these companies obtain access to cutting-edge research and facilities.

From 1996 through 2012, the IEEC’s work led to the creation of 780 jobs as well as the retention of 1,000 positions at New York state companies. The center has had an economic impact of more than $971 million on the state. “The IEEC was our origin, and it remains our key economic engine,” says Daryl Santos, IEEC director.

William Infantolino, associate director of the IEEC, says reliability testing is one of the center’s specialties. It’s an area of growing concern to electronics manufacturers, whose customers now expect, for example, that their cell phones will still work if they’re dropped.

The IEEC can expose parts and devices to accelerated test conditions to see how they perform over time when exposed to elevated temperatures or other stressors. “We can fit a lifetime of on/off cycles into three months,” Infantolino explains. “It gives us an approximation of how a part will perform over time in actual use.”

Some of the most exciting IEEC projects now focus on 3D integration of silicon electronic devices. “That has always been a dream,” Sammakia says, “and now it is becoming real.”

Essentially, in an effort to make devices smaller and help them run faster, companies now are stacking microchips vertically, Infantolino says. Sematech, a consortium of semiconductor companies, is working in this area and has come to the IEEC for assistance with this research. Binghamton experts are conducting mechanical and thermal modeling as well as reliability assessments related to these designs.

“There’s high potential in 3D packaging,” Infantolino says. “It comes down to cost for performance. If the performance and size advantages can justify the cost of the more complex structure, there’ll be a major migration. It’s going to take some time to develop the processes, equipment and supply chain. It’s not going to happen overnight.”

Like the IEEC, the Center for Advanced Microelectronics Manufacturing (CAMM) takes its cue from industry. In fact, the center is based at Endicott Interconnect Technologies, about a 15-minute drive from the University.

In general, the CAMM looks for ways to translate aspects of traditional electronics manufacturing into flexible, roll-to-roll processes. Its 10,000-square-foot facility boasts a panel line for process and product development and an integrated roll-to-roll research line for product development. Much of the equipment found there is available nowhere else in the country.

Roll-to-roll processing is traditionally the domain of paper: Think of the enormous rolls of newsprint on which your local newspaper is printed. The CAMM has helped to expand that domain to include lightweight, thin plastic and, most recently, flexible glass. Corning Inc. collaborated with the CAMM to evaluate its spooled flexible Willow Glass. While glass is the preferred substrate for many kinds of electronics, scientists were unsure about the design rules for equipment that would handle and process flexible glass.

Cynthia Giroux, division vice president and research director for optics and surface technologies at Corning, participates on the CAMM’s executive advisory board and notes the company’s relationship with the CAMM has led to numerous conference presentations and journal articles. “Cost-efficient manufacturing is a necessary step in achieving the goal of high-quality and interconnected electronics that are integrated into everyday objects such as tabletops, walls, appliances and vehicles,” she says. “We look forward to further collaborations with Binghamton University’s S3IP centers to identify flexible electronic device designs and fabrication methods for these emerging applications.”

“That’s the future of the CAMM: to help companies commercialize products,” Sammakia says.

Mark Poliks, CAMM technical director and R&D director for Endicott Interconnect, agrees. “There is a huge opportunity for advanced diagnostic and therapeutic medical electronics for use both in and out of the body: high-definition ultrasound probes, wearable MRI coils, neural stimulation, retinal implants and more,” Poliks says. “Even relatively simple monitoring devices such as heart monitors, oxygen sensors or glucose monitors could be reduced to a comfortable-to-wear Band-Aid patch complete with a wireless interface.”

Looking to the future

In addition to healthcare, smart energy is a key focus of research at Binghamton. That emphasis is evident in the work done by the Center for Autonomous Solar Power (CASP) and the Center for Energy-Smart Electronic Systems (ES2).

At CASP, scientists are working to improve thin-film solar cells, build next-generation supercapacitors, conduct reliability studies and develop thermoelectric cells that expand on the fraction of the sun’s energy captured by most solar technology.

Laboratories around the world are engaged in a game of one-upmanship to build ever more efficient solar cells, says Charles R. Westgate, CASP director. Binghamton researchers have entered this race, focusing on cells made with copper zinc tin sulfide (CZTS), which is less costly than the materials used in most cells now on the market. “Among universities, we’re now No. 1,” he says.

The greatest barrier to more widespread use of solar power in the United States is cost, Westgate notes. The development of solar cells from materials that are easier to extract from the earth should address cost concerns and result in processes that are less harmful to the environment.

“We’re meeting only about 1 or 2 percent of our energy needs from solar energy,” he says. “A reasonable goal is to increase that to about 10 percent in the next decade and about 20 percent in the long term.”

“The whole is bigger than the sum of the parts,” says Kanad Ghose, ES2 site director and chair of the Department of Computer Science at Binghamton. “The center takes a holistic approach when it considers computing, thermal and other challenges.”

ES2 is a National Science Foundation Industry/University Cooperative Research Center with nearly two dozen industry partners, including IBM, Microsoft and Facebook. The center will soon open a data center that’s also a “living laboratory” where new products and ideas can be tested. “Companies can come in, develop best-practice solutions and evaluate them,” Ghose says. “We’ll be developing standards for industry in this lab.”

ES2 researchers will help companies establish the right amount of cooling for a given number of servers, identify new ways to recover and use the waste heat from data centers, and suggest new methods of designing data centers to maximize efficiency.

ES2 also offers interdisciplinary training for graduate students. The research center is quite new, but  graduates have already gone on to positions with industry giant Intel.

“The United States has to invest in computing technology to stay competitive,” he adds. “The future of the country is at stake. Already, some of the fastest computers are in China and not in the U.S.”

At Binghamton University, campus, state and federal investments are evident in a new facility for S3IP. The Center of Excellence will move this year into a $30 million, 114,000-square-foot space that will allow it to expand and consolidate its operations. ES2 will use the facility itself as a lab for “smart buildings,” testing ways to reduce energy consumption through smart lighting, natural cooling and other “green”  innovations.

The building will connect other facilities at Binghamton’s Innovative Technologies Complex focused on biotechnology and engineering as well as a future R&D facility to be devoted to smart energy.

“The S3IP building is going to be the virtual bridge between engineering and science,” Sammakia says. “The IEEC has always done that. Now we will have this building and these labs, and we expect that faculty from chemistry and biology, physics and math will come and partner with engineering.”

Like this article? Please share!
electronicselectronics packagingenergyengineeringinventorS3IPsmall-scale systems
0
In search of immigrant insights
Go with the flow