In search of immigrant insights 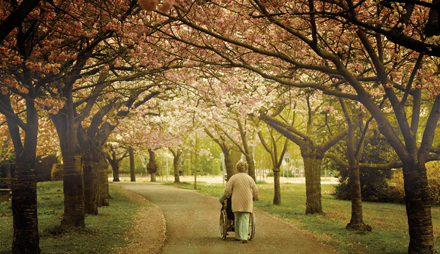 An immigrant’s cultural background may yield valuable clues about what that person needs to live a happy, well-balanced life. But professionals who work with immigrants should treat those clues with care: It’s not productive to draw conclusions based solely on ethnic heritage.

The work of three Binghamton University researchers, all raised in South Korea, demonstrates that the needs of Asian immigrants in the United States are more complex and nuanced than many have assumed. These researchers offer important insights to social workers, teachers and others who try to help individual immigrants thrive.

What they find is more important than ever: Asians have passed Hispanics as the largest group of new immigrants to the United States. In 2011, Asian-Americans numbered a record 18.2 million, or 5.8 percent of the total U.S. population, up from less than 1 percent in 1965, according to data published by the Pew Research Center. 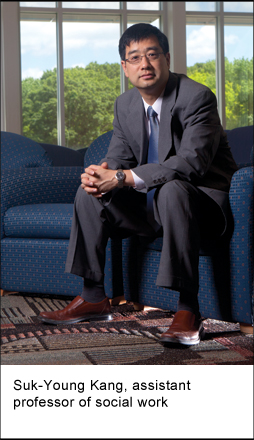 “Researchers like me try to categorize people,” says Suk-Young Kang, assistant professor of social work, who studies the needs of elderly people as well as the needs of Asian immigrants. Categories can be tricky, though. Not only does each immigrant group have distinct needs, but even people who come to the United States from the same country may live through different versions of the immigrant experience.

Kang grew curious about immigrant diversity after working with elderly Korean immigrants in Chicago for several years, and while helping his dissertation chair at Columbia University with a monograph on the healthcare needs of Asian immigrants in New York City. The findings of that study might also apply in Los Angeles, Chicago or Toronto — cities with large Asian-American populations. But what about immigrants living more isolated lives?

“There are small numbers of people who live outside the major metropolitan areas, where they don’t have access to the resources of ethnic enclaves,” Kang says. Few of their neighbors speak their language, eat their food or understand their culture. “I wondered if they lived differently.”

Kang started to explore that question while working at Arizona State University. He interviewed 240 elderly Arizona residents — half of them born in Korea and half born in China — about interactions with their local healthcare systems.

Preliminary findings show that small communities of Asian-American elders face different challenges than their counterparts in cities with big Asian populations. Language is one key concern.

“In New York City, they can see doctors who speak Korean or Chinese,” Kang says. But in Arizona, Asian-born patients usually rely on phone-based translation services. And translators often miss the finer points of the language.

“The interpreters aren’t familiar with nuances such as honorifics” — for example, the right verb form to use when addressing an older person, Kang says. Offended by such blunders, some elders refuse to use translation services. That makes it hard to get medical attention or to make use of what might be valuable information.

Besides Asian-American immigrants outside urban Chinatowns and Koreatowns, Kang is curious about at least two other ethnic subgroups — the tiny number of immigrants in the United States who hail from North Korea as well as Korean-speaking immigrants from China. He also hopes one day to add an Asian-American perspective to another important strand of his research: exploring ways to reduce stress on people who care for elderly family members.

Kang’s findings demonstrate that while heritage is important, it’s a complex factor. Social workers who are developing intervention plans shouldn’t assume too much based on what they think they know about their clients’ backgrounds.

“When I started in social work, I heard, ‘Everybody is unique,’” Kang says. “Sometimes people forget that.” 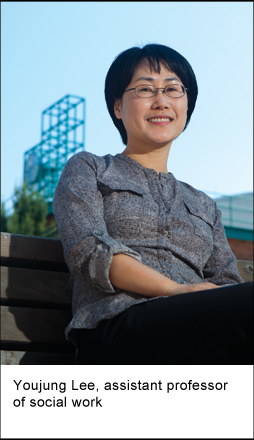 If geography may help shape an immigrant’s needs, so may a person’s role in his or her household.

Consider a Korean-American immigrant caring for a loved one with dementia. Depending on whether the patient is the caregiver’s parent or spouse, the caregiver will feel different pressures, gain different rewards and seek entirely different kinds of help, says Youjung Lee, an assistant professor of social work at Binghamton.

Most studies of relatives who care for dementia patients focus on the burdens that those caregivers endure, Lee says. But according to a study she conducted, many caregivers also draw satisfaction from the work.

Lee surveyed 85 Korean-American caregivers in Los Angeles, Houston and Chicago to learn what factors made caregiving a positive experience. She assumed that culture would play a key role: The more a person held to Asian values, with their emphasis on family ties, the better he or she would feel about caregiving.

That initial hypothesis was wrong. “It turned out that culture was not that important,” Lee says. Far more crucial was the way in which relatives and friends pitched in to help with patient care and household chores. “When Korean caregivers have quality social support, it influences their positive appreciation of caregiving,” she says.

Lee next decided to find out more about the roles of culture and social support. She was curious about what kinds of support caregivers wanted most. To that end, she conducted in-depth interviews with eight Korean-American caregivers in Flushing, N.Y.

Spouses, Lee discovered, see dementia care not as a blessing or curse, but simply as a feature of the marriage compact. And those older caregivers don’t wish for a great deal of day-to-day help. What they really want is medical information in Korean, to help them provide better care.

For grown Korean-born children, the job of tending to a parent with dementia comes as one more duty on top of others, such as earning a living and caring for children of their own. These caregivers may feel overwhelmed. But they also feel good about helping their elders, Lee says: “They are fulfilling  the expectations of Asian culture that they should be good daughters, sons or daughters-in-law.”

Because they speak English, younger caregivers have an easier time negotiating the healthcare system. Still, juggling elder care, child care and outside employment, all while living with a foot in each of two cultures, causes a great deal of stress. “They need more specialized and individualized mental-health services,” Lee says.

Like Kang, Lee cautions against oversimplification. All families are not alike — not even all immigrant families from South Korea. “We need to investigate the level of acculturation, their relationship to the U.S. community, their level of income, their level of education in America,” she says. “All those factors should be taken into consideration when we assess an immigrant family and each family member.”

From anger to gratitude 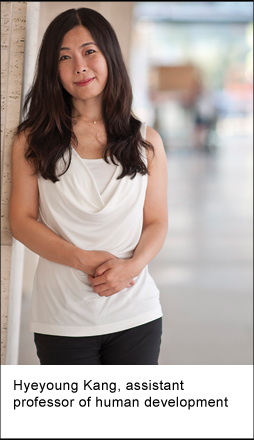 Hyeyoung Kang also emphasizes the positive side of the immigrant family experience. It’s a poorly understood subject, since studies of minority families so often concentrate on challenges and conflicts, says Kang, an assistant professor of human development.

Much of her research aims to fill that gap by exploring relationships between immigrant children and their parents. She’s also interested in what factors contribute to these individuals’ resilience.

There are certainly occasions for conflict in immigrant families. “They’re usually starting life here at the bottom,” Kang says. “They need a lot of support from family members.” For example, parents who don’t speak English rely on their children to help them transact business outside their own communities.

Many Korean-American parents put in long hours running small businesses rather than nurturing children at home. Because of their cultural background and busy work life, they may eschew the open, affectionate communications that Americans consider the norm, while demanding unquestioning obedience and hard work from their kids. One of the most common complaints Kang hears from Korean-American young people is that their parents expect them to earn straight A’s.

Given those pressures, and the cultural gap between foreign-born parents and their U.S.-raised children, one might expect bitter feelings to endure as children grow into adulthood and away from their roots.

Not so, says Kang. “There seems to be a transformation during the transition from adolescence to young adulthood.” During that period, some of the very behavior that made kids’ blood boil when they were teens — the demands for perfect report cards, the weekends spent working at the family business — often begins to inspire gratitude and affection.

In research she conducted with colleagues at the University of Illinois at Urbana-Champaign, Kang surveyed and interviewed Korean immigrant families and adolescents as well as Korean-American young adults, ages 18-25. Most of those subjects said that, yes, they had often resented their parents in the past. But now they saw their upbringing in a more positive light.

One phrase that kept coming up, Kang says, was “parental sacrifice.” The young people often attributed positive meaning to their challenging past experiences with their parents. For example, they would say, “My parents were unavailable because they gave up their life to provide for me so that I can live a better life than them,” instead of staying bitter about their parents’ absence early in their life. Some, Kang says, come to embrace their elders’ vision. “They say, ‘My parents came here so that I could be successful in this country. I have to work hard and give back.’”

This evolution comes in part because Korean-American children mature cognitively, gain physical distance from their parents and are exposed to a dense ethnic peer network as they leave their teens and enter their 20s. However, Kang notes, there are some Korean-American youth who feel pressured and continue to stay disconnected or bitter toward their parents.

In future studies, Kang hopes to extend this research to other immigrant populations, especially Latinos.

One lesson Kang draws from her findings is that the ingredients that make up a “normal” family experience vary greatly. “For example, we often hear that it’s important for parents to communicate with their children and express affection,” she says. “But these kids stay connected to their parents and maintain positive relations despite previous challenges.”