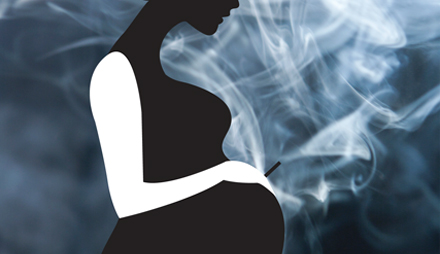 Most pregnant smokers know that cigarettes can harm their babies. But stern lectures from authority figures won’t help them quit.

That message came through loud and clear when Binghamton researchers went into the field to learn how to deliver information about tobacco use to pregnant women. Based on insights from front-line experts — pregnant smokers and their healthcare providers — the investigators created a video that they hope will succeed where other interventions have failed.

Twenty-six percent of women in upstate New York who gave birth in 2009 smoked during the three months before they conceived, and 12.24 percent still smoked in the last three months of their pregnancies, according to the Pregnancy Risk Assessment Monitoring System at the federal Centers for Disease Control and Prevention. 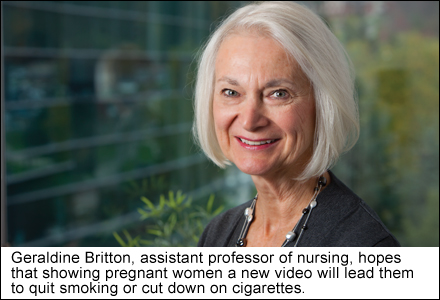 In some rural areas the problem is worse, says Geraldine Britton, assistant professor at the Decker School of Nursing and director of Binghamton’s Interdisciplinary Tobacco Use Research Program (ITURP). In western Steuben County, for example, 52 percent of women enrolled in Medicaid, Obstetrics and Maternal Services (MOMS) in 2009 said they smoked during the three months before they became pregnant.

Even that figure may not be telling the whole story. “Rates of smoking during pregnancy are profoundly under-reported,” Britton says.

Britton’s interest in smoking during pregnancy dates back to the 1980s, when she worked as a clinical nurse specialist and educator in maternal child care, and to the 1990s, when she coordinated the Southern Tier Tobacco Awareness Coalition.

Later, for her doctoral dissertation at the Decker School, she tested the effectiveness of a nurse-managed program called Smoke Free Baby and Me that was integrated into routine prenatal care. She and a coalition of providers followed 194 pregnant smokers through pregnancy and postpartum. Compared to a control group, the study found significant differences in smoking cessation at the postpartum visit in the group of women enrolled in the program who had quit just before their first prenatal visit — helping them not relapse. But it found no differences among those who were still smoking at the first prenatal visit.

In addition, the study revealed that many expectant mothers were hiding their smoking from healthcare providers. The women’s self-reports were validated by testing for a metabolite of nicotine called cotinine, which is found in smokers’ urine. “We found that 30 to 40 percent of the women who told us that they weren’t smoking had positive cotinines,” Britton says.

Hoping to devise better smoking-cessation strategies, Britton and her colleagues in ITURP, supported by a March of Dimes grant, conducted a series of nine focus groups. Three of those groups consisted of pregnant smokers and six of healthcare providers. “The purpose was to increase the understanding of the pregnant smoker, including the motivation to quit,” Britton says. The researchers also asked for ideas about how to communicate the message.

One important insight that emerged from the groups is that it’s hard to appreciate a risk you can’t see. Unlike a baby born with fetal alcohol syndrome, the child born to a smoker may look like any other newborn. But a mother’s smoking can create a host of hazards for the baby, including low birth weight, nicotine withdrawal, asthma, cognitive delays and attention deficit hyperactivity disorder (ADHD). “We had to somehow put a face to the problem,” Britton says.

The idea of a video appealed to both the groups of expectant mothers and to the healthcare professionals. One nurse, for example, mentioned that New York state requires all new parents to watch a video on shaken baby syndrome before leaving the hospital, says Pamela Manktelow, coordinator of the MOMS program at Saint James Mercy Hospital in Hornell, N.Y. “She said, ‘If we had a smoking video for pregnant women, so they would know what they’re doing to their baby as they watch it, I think that would help.’”

A video also allows you to control the tone of the message — an urgent concern that emerged from the focus groups. “The pregnant women have an absolute cynicism, or even fear, about being lectured,” says ITURP co-investigator Sean McKitrick, former assistant provost and director of the Office of Institutional Research and Assessment at Binghamton University.

Having analyzed the themes from the focus groups, ITURP contracted with White Knight Productions of Vestal, N.Y., to shoot the video. The researchers then returned to groups of pregnant women and nurses for ideas about content. To provide maximum impact, focus-group participants decided that the video should feature real people, not actors. For example, in one vignette, a woman who smoked during her pregnancy describes how she and her family resuscitated her weeks-old infant, who had stopped breathing — and then cautions pregnant women against smoking. “Her little girl is 4 years old and has severe asthma now,” Britton says.

Recruiting women to participate was easy, Manktelow says. “The women feel that they’re helping other people quit.” Even when the crew filmed a newborn howling his way through nicotine withdrawal, the mother didn’t hesitate to let ITURP use the footage, she says.

Along with mothers from participating hospitals and clinics, Manktelow and several other nurses, including Lucy Keith from Arnot Ogden Medical Center’s MOMS, appear in the video. The producers also used children to talk about the dangers of smoking. “The pregnant women felt that this message was probably better delivered by children,” Britton says.

With production complete, members of ITURP are seeking funds to help them test the video. They plan to show the segment, which runs about 10 minutes, to pregnant women during their prenatal visits. Researchers will measure whether women who see the video, compared with a control group, are more likely to quit or cut down on cigarettes and less likely to resume smoking.

Besides producing a new smoking-cessation intervention, the project has helped to solidify ITURP’s partnership with community healthcare providers. Such alliances are crucial for developing effective solutions based on real-world evidence, Britton says. “I like to call it the ‘triple helix’ — practice, research and theory,” she explains. “You need to start in practice in order to develop questions, design effective interventions and conduct research to test and build theory. Then you must return the findings to practice.”

The State University of New York identified healthcare as a major focus of its strategic plan, The Power of SUNY. Binghamton University has responded with the development of a campus-wide Healthcare Initiative, combining expertise in life sciences with research teams from chemistry, physics, computer science, mechanical engineering, systems and industrial engineering and other areas.

The initiative will advance research and scholarly activity in health and related sciences and engineering, bring multidisciplinary faculty teams together, seek areas that have a broad impact on society, enhance related educational programming and establish Binghamton University, the region and New York state as a center for research on healthcare innovations.

The Interdisciplinary Tobacco Use Research Program (ITURP) brings together researchers from several Binghamton University departments, plus administrators and students.

Geraldine Britton’s co-investigators in the program are Gary James, director of the Institute for Primary and Preventative Health Care in Binghamton’s bioengineering program; Sean McKitrick, former assistant provost and director of the Office of Institutional Research and Assessment; and Steven Lynn, distinguished professor of psychology and director of the Psychological Clinic. Lori Sprague and Joyce Rhodes-Keefe, clinical faculty in the Decker School of Nursing, co-chair the video development subcommittee. Students at all levels are integral members of the team.