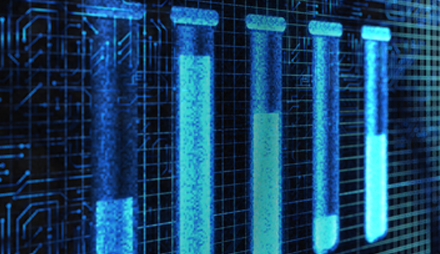 Suppose you are sick enough to go to an emergency room. A physician examines you and decides that some blood tests are warranted. A phlebotomist draws the blood and sends it to a lab for testing. The results won’t be known for some time, however, so all the ER staff can do is try to make you comfortable while you are feeling progressively worse.

David Klotzkin, an associate professor of electrical and computer engineering at Binghamton, says that’s not good enough. He and a colleague, Ian Papautsky, director of the University of Cincinnati’s BioMicrosystems Lab and its Micro/Nano Fabrication Engineering Research Center, have developed a technology to accelerate testing and enhance it in a number of other ways. 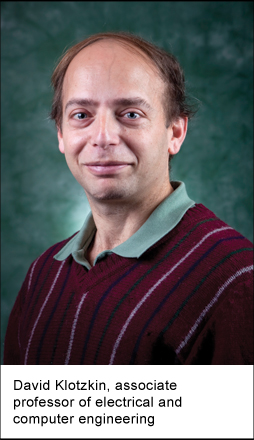 Klotzkin is an expert on the properties of light. Much of his research has focused intensely on photonics — the science of photons, elementary light particles — since he earned his PhD in electrical engineering at the University of Michigan.

As a senior engineer at Lasertron Inc., a manufacturer of photonics components, he developed high-speed laser modulation equipment used in multiplexing — the combining of multiple message signals or data streams, such as many television channels or telephone conversations that share a single cable to maximize the use of an expensive resource.

As an American Society for Engineering Education summer faculty fellow at the Naval Research Laboratory in Washington, D.C., he designed circuits that are essential for free-space optical communications. This low-power, high-data-volume alternative to conventional radio frequency communications, with military and civilian applications, is quickly evolving thanks to improved laser technology and compact optical systems.

Klotzkin began collaborating with Papautsky while he was on the faculty at the University of Cincinnati. At the time, Klotzkin was involved in research on organic light emitters, thin films of organic matter on glass that emit light when exposed to an energy source to excite their electrons.

Papautsky, a fellow faculty member, was studying microfluidics, the science of how fluids behave when they are manipulated in tiny spaces. He is a leader in development of what’s called “lab-on-a-chip,” which integrates several laboratory tests on a tiny chip.

With a single inexpensive, disposable lab-on-a-chip, it may be possible to conduct — in the field — tests that, not so long ago, had to be conducted individually in a laboratory remote from where the sample was acquired. It’s also possible to perform those tests simultaneously and quickly, using samples as small as a millionth of a liter.

“In the microfluidics community, we’ve had this idea of small, disposable platforms that could be used for many different tests for a long time,” Papautsky says.

Klotzkin helped him find the way. Since different materials emit different light waves, it is possible to use light to detect the presence of disease-causing micro-organisms such as viruses and bacteria.

“Fluorescence is one of the most commonly used analytic techniques in the biosciences,” Klotzkin explains. Here’s how it works in the typical microfluidic immunoassay: Whatever is being tested — bacteria, viruses or some other type of organic molecules — is tagged with fluorescently labeled antibodies. An excitation light stimulates the dye to fluoresce. The wavelength of the fluorescence — essentially the “fingerprint” of the disease-causing agent — is observed through a filter that suppresses the excitation light.

There was a problem, though. “There was no way to conveniently build filters into the micro system,” Klotzkin says. Consequently, the detector signal emitted by the dye was inevitably overwhelmed by the excitation light.

“This solution works with any combination of excitation and emission light,” Klotzkin says, “even if two signals overlap in wavelength.”

Klotzkin and Papautsky published their first paper on their solution in 2007. The following year, Klotzkin joined Binghamton’s faculty. Since then, they have continued to collaborate on lab-on-a-chip models that employ the polarized light approach. They’ve demonstrated the efficacy of this technique with what Papautsky calls “low-hanging fruit,” miniature and portable oxygen sensors for firefighters. Labs-on-a-chip for blood analyses are next.

“We are working toward the goal of putting a ‘lab’ in everyone’s office,” Klotzkin says, “and putting fluorescence in a microchip is one step toward that. More than half of emergency room patients require at least one blood test. With this technology they can get results immediately, from a much smaller volume of blood. Rather than send a vial of blood out to a lab, the doctor can put a drop of blood into a microfluidic system and analyze it instantly.”

Not only do labs-on-a-chip produce potentially life-saving results more quickly, they can perform several tests simultaneously. With patents pending, the engineers’ work may be about to pay off.

“There was a lot of excitement about the lab-on-a-chip idea back in the early 2000s,” Papautsky says, “but then a number of start-ups failed and investors pulled back. Things got even worse when the economy went into recession.” Now that the economy is rebounding, the inventors’ concept could result in a new product in the near future.