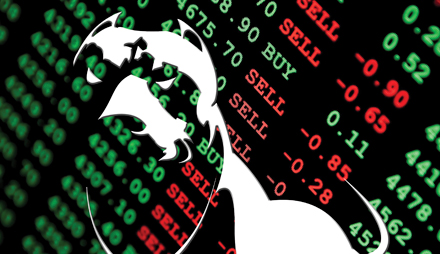 Republican presidential candidates have called for repealing some or all of the 2002 Sarbanes-Oxley Act’s provisions. President Obama has mentioned easing its restrictions, even as the Public Company Accounting Oversight Board, established to oversee compliance with the law, considers ways to improve transparency requirements.

New research from Binghamton University suggests that strengthening parts of the law, enacted in the wake of the Enron meltdown and other corporate scandals, would improve corporate performance and shareholder value.

Yan Zhang, an associate professor of accounting, has found: 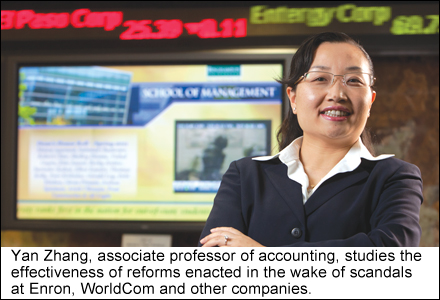 “SOX is good, but it doesn’t solve the problem entirely,” Zhang says.

Before the passage of Sarbanes-Oxley, big accounting firms such as Arthur Anderson (Enron’s auditor) lacked independence. A key provision of SOX is removing conflicts of interest for these firms. In fact, it’s now unlawful for auditors to perform various non-audit services for their audit clients. The Public Company Accounting Oversight Board has been seeking public comment on how to further improve the independence of the outside auditing firms retained to examine companies.

“Every now and then, inspectors can trace an audit failure to a competence issue, such as in the design of the audit methodology or in its execution,” says James R. Doty, chair of the oversight board. “But on the whole, these firms are highly competent. And yet the failures continue to occur, in spite of firms’ remediation efforts. I am left with the inescapable question whether the root of the problem is auditor skepticism, coming to ground in the bedrock of independence. The loss of independence destroys skepticism.”

The impact of CEO power

Zhang’s research suggests that the board should consider limits to the influence a chief executive can have on the audit committee, in addition to the outside audit firms.

In the post-SOX era, stock exchanges prohibit CEOs from being directly involved with selecting members of the audit committee, but that doesn’t guarantee the committee will be free of a CEO’s informal influence. Zhang and her colleagues set up a metric to gauge how powerful a chief executive is, measuring prestige, expertise, corporate ownership and structural power.

The data showed that CEO power weakens the effectiveness of audit committee financial expertise in reducing earnings restatements — an indication that a supposedly independent and expert audit committee could still be influenced, even if informally, by a chief executive. A chief executive could refuse to provide necessary information or obfuscate details the audit committee requires. And a strong CEO can get away with it.

Says oversight board spokesman Brian Goodnough: “Anything pertaining to CEO and CFO power over the company is an area we’ve particularly gotten into.”

Zhang’s study didn’t consider the potential effects of limiting audit firm tenure, but her first suggestion in countering the effect of a powerful CEO is more direct: Rebalance the power other directors have to counter the chief executive, regulation that would require action by the Securities and Exchange Commission.

Doty and other members of the oversight board are concerned about transparency, but were under pressure in late 2011 to ease disclosure regulations, even though Securities and Exchange Commission Chairman Mary Schapiro has called for increased transparency in the capital markets to protect investors. Zhang’s research suggests they should stay the course, or even force increased transparency.

Zhang and a colleague examined the cash on hand of a number of companies and found that opaque (less transparent) companies had a perceived discount for their cash levels: Investors valued cash on hand as low as 45 cents per $1. Transparent firms saw that value around $1.05 per $1.

“Taken together, our findings suggest that managers in firms with fewer disclosure activities are less subject to scrutiny of capital markets and thus are more likely to expropriate cash assets,” they write. And that can lead to empire building.

The logic is this: A CEO is looking to expand the company, because a larger company brings greater compensation. With little transparency and a large amount of excess cash, a CEO may be tempted to squander cash on weak acquisitions. “A lot of firms are sitting on too much cash right now,” Zhang says.

“The empire-building motive is particularly severe when managers control cash levels in excess of those needed for operations and investment,” she writes. “Lending further credence to the monitoring effect of disclosure activity, we find evidence that the negative effect of major expansion on shareholder value is reversed when the firm has sufficient disclosure activities.”

One section of Sarbanes-Oxley requires audit committees to include financial experts. Originally, SOX 407 narrowly defined a financial expert as an accountant. Later the SEC broadened this definition by allowing others with financial expertise, such as a chief executive, investment banker or venture capitalist, to serve in this capacity as well.

That suggests one of the following options:

• Accountants and CPAs, governed by professional ethics that require them to place their fiduciary duty ahead of their own gain, forgo opportunities to earn expertise rents.

• Nonaccountant committee members — venture capitalists, CEOs and others — may be more experienced in investing in the capital market and thus trade more aggressively than accounting financial experts.

• The nonaccountant financial experts may be more likely to engage in inappropriate insider trading. (Zhang’s research has not delved into this possibility.)

“This is the first study, to our knowledge, that demonstrates a negative aspect of mandating a financial expert on the audit committee,” Zhang says.

With SOX up for debate, Zhang’s work suggests ways that additional reforms can rebuild investors’ faith in the market. Her findings are forthcoming in top-tier publications, including the Accounting Review.

“Is the reform good enough? Is it working?” she asks. “We do see financial improvements and an improvement in earnings quality, but regulators need to do more.”

Information rents: The benefit, particularly in trading, that investors, board members, auditing panels and others can gain from knowledge of a company’s financial situation.

Insider trading: The trading in stock and securities by a company’s directors, officers and employees. The practice is generally legal, but can be illegal if it breaches the investor’s fiduciary duty, or uses material, non-public information.

SOX: The Sarbanes-Oxley Act, adopted in 2002 in the wake of accounting scandals at Enron and other firms. Under the law, publicly held companies must enhance financial disclosure, require auditor independence, reduce conflicts of interest and improve transparency.

SOX 407: The section of the Sarbanes-Oxley Act that requires audit committees to include financial experts, but allows experts to be either accountants or a more generic financial expert, such as a chief executive, investment banker or venture capitalist.

Transparency: The measure of how public a firm’s accounting practices are, using more than 20 metrics, including financial and governmental disclosures, timeliness, accounting policies and credibility.