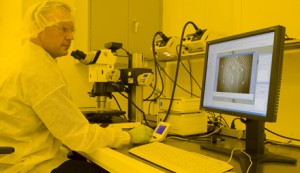 Binghamton University inaugurated its Center for Advanced Microelectronics Manufacturing (CAMM) facility today in a ceremony attended by business, political and community leaders. A collaborative effort by Binghamton University, Endicott Interconnect Technologies and Cornell University, the CAMM will pioneer microelectronics manufacturing research and development in a roll-to-roll (R2R) format. These efforts will result in flexible, rugged, lightweight electronic components and innovative products that will be critical to next-generation applications in areas such as military and homeland security, lighting, energy and power generation, displays, and product identification and tracking.

The CAMM is an integral component of Binghamton University’s New York State Center of Excellence in Small Scale Systems Integration and Packaging. As one of New York State’s most innovative initiatives, the Centers of Excellence (COE) support high technology ventures through a collaborative approach among the State, academia, private venture capital companies, and other private and public sector parties. As one of only six COE’s in New York, Binghamton University’s Center specializes in small-scale systems design, process development, prototyping, and manufacturing for academia and the microelectronics industry.

Plans for the CAMM were initiated in 2005 when the United States Display Consortium (USDC) selected Binghamton University to manage this new initiative.  The USDC provided $12 million in equipment to establish the CAMM, which is hosted by Endicott Interconnect Technologies and draws collaborative resources from Cornell University.

From the USDC’s initial collaboration, the CAMM has grown into a facility that consists of a 10,000 square foot area and clean room. It includes an integrated roll-to-roll flexible electronics prototype manufacturing line, and an associated microfabrication laboratory. CAMM facilities also include a precision lithography stepper, vacuum coaters, and an in-line defect inspection capability.

“Binghamton University is a world leader in small scale systems integration and packaging research,” said Binghamton University President Lois B. DeFleur. “The Center for Advanced Microelectronics Manufacturing offers an unparalleled research and development capability that will help businesses compete in the global marketplace and spur economic advancement in the Southern Tier, New York State and the nation.”

Currently, most advanced electronics components are produced on silicon or quartz wafers, or on plates of specialized glass in a “batch” process that has been the backbone of the integrated circuit (IC) and flat panel display (FPD) industries. A R2R process, which integrates electronics on flexible plastic means, in theory, that components can be produced more efficiently, at higher yields and at a lower cost than is common practice today and opens up potential new application areas for flexible electronics.

Directed by Bahgat Sammakia, professor of mechanical engineering and director of Binghamton University’s New York State Center of Excellence in Small Scale Systems Packaging Center, the CAMM will evaluate equipment and materials developed under the auspices of USDC, industry and its own research and development program that will be further developed into a fully-integrated prototype manufacturing line. The CAMM will also provide large-scale testing whereby academic and industrial research groups can test their work for manufacturing applicability without the high costs and risks typically associated with such activities.

The CAMM is also working in tandem with the U.S. Army-funded Flexible Display Center (FDC) at Arizona State University (Tempe, Ariz.) on display-related R&D. The FDC focuses on process development and pilot production of flexible backplanes and displays for U.S. Army platforms and eventually, commercial applications.