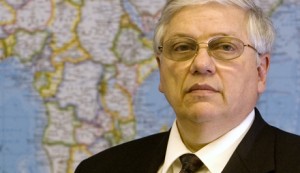 A new book by a Binghamton faculty member argues that the policies and programs of the World Bank and International Monetary Fund have led to increased violations of human rights in the developing world.

David Cingranelli, professor of political science, worked with M. Rodwan Abouharb on Human Rights and Structural Adjustment, published late last year by Cambridge University Press. The book considers the effect of structural adjustment agreements, in which countries liberalize and privatize their economies, on human rights.
The rich countries of the world have invested a great deal of money over a long period of time with the goal of facilitating economic development in the Third World. Many economists have concluded that those efforts have not been particularly successful.

“We argue in this book that one of the important reasons they have not been successful is that the structural adjustment programs of the IMF and World Bank have led to an undermining of respect for most types of human rights in the developing world,” Cingranelli said. “We believe — and we’re not alone in this — that respect for human rights is necessary for economic development to occur. Based on that, we argue that there ought to be a human rights-based strategy of economic development in which the World Bank and IMF are as concerned about what’s happening to human rights conditions in the countries they’re working with as they are about the more economic indicators of development.”
Cingranelli is among a small but growing number of scholars who use quantitative measures of human rights.

The Cingranelli and Richards (CIRI) Human Rights Data Project is proof of Cingranelli’s sincerity on that point. That project, funded by the National Science Foundation and led by Cingranelli and David L. Richards at the University of Memphis, issues scores each year for each country in the world for 13 different human rights (including torture, workers’ rights, women’s rights and freedom of religion). The scores are used by the U.S. State Department, the World Bank, European governments and U.S. agencies to evaluate their programs and help make decisions about distributions of funds.

Cingranelli said the new book draws on that data and other statistics to demonstrate in a rigorous, empirical way what some activist groups have long claimed about structural adjustment programs.

Countries as different as Ghana and Bolivia offer anecdotal evidence to support Cingranelli’s case. However, there are also examples of success under structural adjustment, including a few countries in central Europe.

“I’m not convinced by an argument where people are picking their examples to prove their point,” Cingranelli said. “We look at all developing countries, and for each one we consider between 1981 and 2004 how many years have they spent under structural adjustment.”

While more years under an agreement should mean better performance by a country’s economy, that’s not the case. In fact, the longer a country had been under structural adjustment, the worse its respect for human rights and, other studies have shown, the lower the rate of economic growth.
One unexpected finding, however, is that the longer a country was under structural adjustment, the more democratic it became.

“I think what it shows is that the only category of human rights that the bank and the fund — and the United States, which is a major donor — have ever really cared about is democracy,” Cingranelli said. “And I think in subtle ways the bank and the fund have encouraged countries to become more transparent in their economic affairs, that that’s had some spin-off in their politics.”

What’s the alternative? That’s a tough question, and Cingranelli doesn’t claim to have the magic answer. But he argues that the bank and the fund should monitor the effect of their programs on both human rights and economic growth and insist there not be a deterioration in human rights.