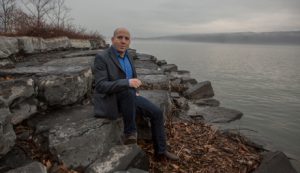 Alexi Zentner has written about family, duty and responsibility before. But the Binghamton University novelist’s latest book, Copperhead, takes him into even more personal territory.

“It’s a book I’ve been trying to figure out how to write my entire life,” he says.

Zentner, 45, grew up Jewish, the son of social workers who fought anti-Semitism and racism. The year he was 18, white supremacists firebombed their office in Ontario, Canada. His parents rebuilt the office, right next door to their home, and a year later it was attacked again. No one was ever charged with the crimes. 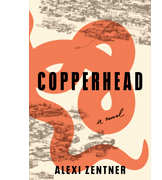 Copperhead opens with a note to readers that explains some of this background. “I’m generally a private person,” Zentner says. “But I think it’s important to know that there’s a context to writing this. This isn’t just a reaction to what’s happening today.”

Anti-Semitism and racism are on the rise, he says, but when in history were they ever not an issue? The key question as he sees it is: Why would anyone hate someone else for no reason?

Zentner, author of two other acclaimed works of literary fiction, also writes horror novels under the pen name Ezekiel Boone. Although some of those books deal with a plague of man-eating spiders, writing Copperhead was far scarier.

“A book like this, if I got it wrong, it would be wrong in a spectacular and unpleasant way,” says Zentner, noting he’s a straight white man taking on difficult questions related to race and racism. “What makes it scary is what makes it essential.”

He says he decided he had to risk being wrong rather than risk saying nothing about racism. “If we don’t talk about it in a real way, nothing’s ever going to get better,” he says. “This is a way to open a conversation.”

Copperhead centers on Jessup, a high school senior who comes from an infamous family in a small upstate New York town. His stepfather and half-brother are white supremacists who went to prison after beating two young black men to death. A talented football player with good grades and a black girlfriend, Jessup has tried to put some distance between himself and his family’s church, where members seem eager to fight a so-called racial holy war. He hopes college will be his ticket to a fresh start somewhere far from home.

Why create a protagonist like that? “The truth of the matter is that the bad guys are never as interesting as heroes who are flawed,” Zentner says. “What does it mean to be saddled with that family history? Can you escape it?”

Zentner describes Cortaca, the fictional setting for the book, as a through-the-looking-glass version of Ithaca, where he lives with his wife and their two teenage daughters. In Cortaca, there’s a town-gown divide as well as a white collar-working class divide. There’s also just one high school and thus no easy way for Jessup to start over.

It’s a made-up setting that offers Zentner the freedom to do what’s best for the story. “Fiction is beholden to the truth, not to the facts,” he says.

Copperhead is his attempt to give to readers some of the energy and challenging conversations that students find in his creative writing classes.

“Fiction talks about what it means to be alive and what it means to be human,” says Zentner, who joined Binghamton University’s faculty as an assistant professor of English in 2013. He wants his classroom to be a place where people can talk about things that really matter.

“One of the first things we can ask ourselves if we want to be progressive is: How do we progress?”

Zentner says that means acknowledging our mistakes and being willing to listen. The impulse is to say, “It’s not my fault,” he notes, rather than “How can I do better going forward?”

Zentner admits that nuanced arguments for diversity are hard to sell, much harder than fear. It’s easier to pick up the blunt sword of bigotry than to tease apart systemic problems embedded in our democracy and economy. Still, race, class, gender and sexuality are frequent topics in his classroom and with his friends outside the academy.

“I think of social justice as a language,” Zentner says. “If you were born before 1985, you’re probably not a native speaker. We need to remember that.”

Nobody should get a free pass, he adds, but we need to work at learning that language.

“Complicated conversations can quickly outpace your knowledge,” he says. “That’s true for tax law or home repair, and it’s certainly true when we talk about diversity.”