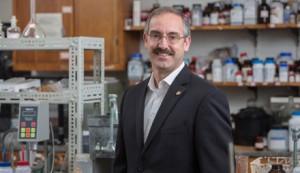 You may have heard about the hazards posed by pranksters who shine laser pointers at airplanes during takeoff or landing. One way to keep those beams of concentrated light from blinding pilots is to incorporate a special dye in the cockpit windows, one that blocks the wavelengths of laser light while letting other wavelengths through.

Optical dyes can be used to control color and light in applications ranging from laser welding to production of sunglasses and plasma TVs. The dyes used for this purpose are often expensive; others are cheap but apt to decompose when exposed to heat.

A better set of options — optical dyes that are both economical and stable — is about to hit the market, thanks to researchers at Binghamton University.

Wayne Jones, professor of chemistry and chair of Binghamton’s chemistry department, received a $50,000 investment from SUNY’s Technology Accelerator Fund (TAF) for a new process to bind organic dyes to metal oxides. The investment will help Jones and his lab further develop the process and scale up for commercial production.

Jones made the discovery in collaboration with Bill Bernier, a research professor in the chemistry department, and graduate student Kenneth Skorenko.

The organic dyes that form the focus of their research are small organic molecules. “In the presence of high temperature, they tend to react with oxygen and water in the atmosphere,” Jones says. The reaction causes the dyes to break down. That makes them a poor choice to use, for example, in plastics that are melted for extrusion or molding.

The new process runs an electric current through a metal electrode to create charged nanoparticles of metal oxide, which bind to molecules of the dye. The bound molecular composite is stable at temperatures higher than needed in most industrial applications.

Jones and his collaborators have used a prototype of this process to make polymer pellets infused with a light-controlling dye. “We hope the TAF investment is going to allow us to take this to full-scale manufacturing,” he says.

Jones’ lab has patented the binding process. To commercialize the invention, the researchers formed a small company, ChromaNanoTech, with Bernier as chief executive officer and Skorenko as chief technology officer. The company will operate in Binghamton University’s business incubator.

One potential customer has already sent ChromaNanoTech a purchase order for a large quantity of dye, Jones says. But there’s a catch. “The purchase order doesn’t become effective until we can produce a kilogram a week,” he says. “In a research lab like mine, typically we’re delighted if we produce one gram a week. So we have to scale up a thousand fold.”

The TAF investment will help the company do just that, allowing the startup to buy new equipment and hire Skorenko, who will work on technologies to make the process run faster.

Jones and his team also plan to develop and commercialize additional processes for stabilizing dyes. ChromaNanoTech has formed a partnership with a dye manufacturer that has hundreds of dyes in its portfolio, none of them currently suitable for applications involving high temperature plastics. “We can potentially convert all of them,” Jones says, “and have a wide series of these dyes.”