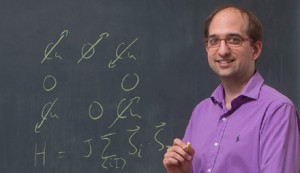 Michael Lawler, assistant professor of physics at Binghamton, is part of an international team of physicists with an ongoing interest in the mysterious pseudogap phase, the phase situated between insulating and superconducting phases in the cuprate phase diagram.

“Evidence has been accumulating that this phase supports an exotic density wave state that may be key to its existence,” the physicists write in the new journal article. A density wave forms in a metal if the fluid electrons themselves crystalize. 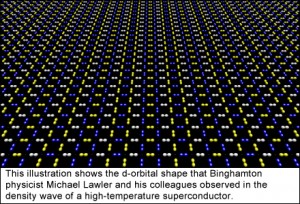 Using a scanning tunneling microscope (STM) to visualize the electronic structure of the oxygen sites within a superconductor, the team found a density wave with a d-orbital structure. (The electron density near each copper atom looks a bit like a daisy in the crystallized pattern.) That’s especially surprising because most density waves have an s-orbital structure; their electron density is isotropic. “It’s not the pattern you would expect,” Lawler says.

In this research, Lawler and his colleagues focused on a member of the cuprate class of superconductors called bismuth strontium calcium copper oxide (BSCCO). “We now believe these density waves exist in all cuprates,” says Lawler, a theorist whose contribution to the research involved subtle uses of the Fourier transform, a mathematical analysis that’s useful when examining amplitude patterns in waves.

Development of this technology could lead to near lossless delivery of electricity to homes and businesses as well as to improvements in cell phone tower receptions and even high-speed trains.