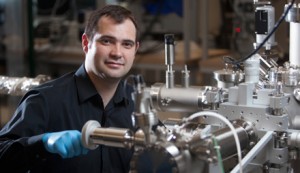 A new technique developed by a Binghamton University physicist and his colleagues will improve the quality of flexible, conductive, transparent glass. (The sort that’s needed for Minority Report-style giant computer displays.)

Louis Piper’s research focuses on metal oxides, a class of materials that includes some of the best insulators as well as some of the best conductors in use today. He and his colleagues, writing this month in the journal Applied Physics Letters, suggest a new method for manufacturing amorphous indium gallium zinc oxide (a-IGZO), a ceramic that looks like glass and can behave like metal, or even like silicon.

Companies such as Sharp and LG already use a-IGZO in some high-end displays. It’s also found in Apple’s new iPad Air. But it has been difficult to maintain transparency and conductivity: In some samples, Piper said, the material took on a brown or yellow tinge that would harm the display’s performance.

Using X-ray photoelectron spectroscopy to examine the chemical composition and electronic structure of a-IGZO, Piper and his colleagues tested 50 samples, each about a centimeter square and a micron thick. Previous studies have worked with fewer than five samples; this larger effort enabled the physicists to observe trends and conduct data analysis.

The surprising finding of these elaborate experiments? The deep subgap feature, which caused the discoloration in the material, is the result of local variation in oxygen coordination, rather than oxygen vacancies. “There was a lot of detective work,” Piper said. “Several models had suggested missing oxygen played an important role, but our data showed otherwise.”

Eventually, computations conducted by theorists at the University of Bath backed up the experimental findings from Binghamton: Oxygen that has too few positive metal ions surrounding it seems to be the cause of the subgap.

The team not only identified the reason for the subgap feature; it also developed a way to resolve the problem. Low-temperature annealing — heating at 390 degrees Fahrenheit (a temperature you might use when baking a pizza) — allows a-IGZO to retain its conductive properties but removes the subgap states, Piper said.

Bottom line, he said: “You don’t have to sacrifice transparency for conductivity.”

Creating a more reliable production process for a-IGZO will save electronics manufacturers money. It could also reduce energy use, as a fully transparent display can take advantage of ambient light and does not require as much backlighting.