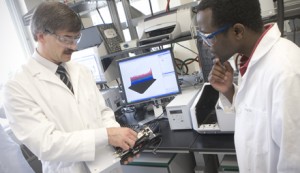 A Binghamton University chemist hopes to learn whether it’s possible to produce new antibiotics or other drugs by modifying ribonucleic acids, or RNA.

Eriks Rozners, an associate professor of chemistry who joined the faculty in 2008, recently coordinated a successful collaborative application for a $550,000 grant from the National Science Foundation’s NSF Major Research Instrumentation Program. The grant will fund the purchase of more powerful nuclear magnetic resonance (NMR) equipment. With a new multi-user instrument on its way, Rozners and others can expand their research in new directions.

“We need this equipment to start new projects and new collaborations,” Rozners said. “The NSF saw the need and potential and used the funds of the American Recovery and Reinvestment Act of 2009 to sponsor us. With the new instrument, we’ll be able to do much more advanced structural studies on biopolymers and materials, something that the Chemistry Department had not been able to do previously.

“We are very excited about the new possibilities this grant has opened to us. This is the beginning of a larger initiative to build a new and more powerful NMR laboratory for high-end structural studies.”

Coupled with a special supplement for collaborative science grant Rozners recently received from the National Institutes of Health for $140,000 for each of the next three years, the NSF grant is also providing a foundation for him to establish a new collaboration with the University of Rochester to study RNA.

He and his collaborators are looking for ways to chemically modify RNA, a biopolymer that until recently many researchers viewed as a relatively low-key player when compared to DNA. Several recent Nobel Prize-winning studies have found a number unique functions that RNA plays in gene regulation processes.

“It’s a relatively new concept,” Rozners said. “Many of our genes are regulated by small RNA molecules. Can we design our own and use them as drugs? Can we modify them to make them more drug-like? RNA has totally different properties than traditional drugs and it’s not so simple, but chemically altering RNA may ultimately lead to new therapeutic measures such as antibiotics or perhaps even anticancer drugs.”

RNA, a multifunctional molecule that can come in different shapes and lengths, copies information from DNA and then transfers it to proteins, adding unique amino acids to the proteins in the process. In the 1990s it was also learned that RNA can catalyze chemical reactions.

“The question now is: How do you control this process?” Rozners asked. “There are many possibilities of how and where we can interfere.”

Rozners and colleagues are also pursuing a project driven by the notion that we’re approaching an antibiotic crisis. They are looking at how we can recognize RNA molecules in a selective fashion, change their structure and control their function. Using neomycin — one of the principal active ingredients of Neosporin — as an example, Rozners said it’s a very efficient antibiotic, but it can’t be used orally or intravenously because it’s very toxic.

“That’s one of the problems we would like to solve,” he said. “We’re looking to develop novel, more selective antibiotics using therapeutic concepts that could help overcome the problem of bacterial resistance.”