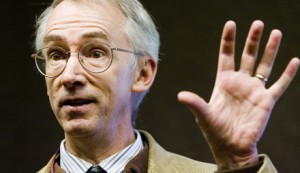 Just as religions dwell upon the eternal battle between good and evil, angels and devils, evolutionary theorists dwell upon the eternal battle between altruistic and selfish behaviors in the Darwinian struggle for existence. In a new study published in the Proceedings of the National Academy of Sciences (PNAS), evolutionary theorists at Binghamton University suggest that selfishness might not be such a villain after all.

Omar Tonsi Eldakar and David Sloan Wilson propose a novel solution to this problem in their article, which is available in the online Early Edition of PNAS  (http://www.pnas.org/papbyrecent.shtml).  They point out that selfish individuals have their own incentive to get rid of other selfish individuals within their own group.

Eldakar and Wilson consider a behavioral strategy called “Selfish Punisher,” which exploits altruists and punishes other selfish individuals, including other selfish punishers. This strategy might seem hypocritical in moral terms but it is highly successful in Darwinian terms, according to their theoretical model published in PNAS and a computer simulation model published in the Journal of Theoretical Biology. Selfish punishers can invade the population when rare but then limit each other, preventing the altruists from being completely eliminated.

Individuals who behave altruistically are vulnerable to exploitation by more selfish individuals within their own group, but groups of altruists can robustly out-compete more selfish groups. Altruism can therefore evolve by natural selection as long as its collective advantage outweighs its more local disadvantage.  All evolutionary theories of altruism reflect this basic conflict between levels of selection.

It might seem that the local advantage of selfishness can be eliminated by punishment, but punishment is itself a form of altruism. For instance, if you pay to put a criminal in jail, all law-abiding citizens benefit but you paid the cost. If someone else pays you to put the criminal in jail, this action costs those individuals something that other law-abiding citizens didn’t have to pay. Economists call this the higher-order public goods problem. Rewards and punishments that enforce good behavior are themselves forms of good behavior that are vulnerable to subversion from within.

Eldakar and Wilson first began thinking about selfish punishment on the basis of a study on humans, which indeed showed that the individuals most likely to cheat were also most likely to punish other cheaters. Similar examples appear to exist in non-human species, including worker bees that prevent other workers from laying eggs while laying a few of their own.

Is selfish punishment really so hypocritical in moral terms? According to Eldakar and Wilson, it can be looked at another way – as a division of labor. Altruists ‘pay’ the selfish punishers by allowing themselves to be exploited, while the selfish punishers return the favor with their second-order altruism. “That way, no one needs to pay the double cost required of an altruist who also punishes others,” says Eldakar. “If so, then the best groups might be those that include a few devils along with the angels.”