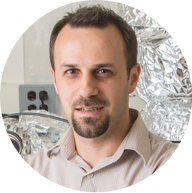 A Binghamton University physicist hopes to broaden our understanding of superconductivity with support from a prestigious National Science Foundation grant.

Pegor Aynajian, whose research focuses on quantum phase transitions, will receive $531,582 over five years through the NSF’s CAREER program, which supports early-career scientists.

Aynajian starts with a simple magnet you might find on your refrigerator when he explains phase transitions. “If you raise the temperature above its critical temperature, it becomes a regular metal,” he says of the magnet. “It won’t stick anymore. That’s called a phase transition.”

“Near quantum phase transitions, new states of quantum matter are born,” he says. “We call it the physics of emergence.”

Under those conditions, scientists have found novel electronic phases — including superconductors — that aren’t seen otherwise.

Superconductors are materials that conduct electricity with absolutely no resistance, when cooled below a certain temperature.

This funding will accelerate Aynajian’s research into discovering emergent phases of matter with an emphasis on “unconventional” superconductors. He’s also interested in ferromagnetic superconductors, which are rare and poorly understood.

Aynajian’s group built a scanning tunneling microscope (STM), which uses quantum physics to “see” electrons on the surface of a sample. With this tool, they can observe the spatial patterns electrons form near a quantum phase transition. Many materials have never been studied this way before.

Aynajian’s group also uses X-rays and neutrons at research facilities around the world.

“Our STM is giving us new and unprecedented experimental results,” Aynajian says. “We can see what electrons do, how they form a new state of order, which did not exist before. Our next goal is to figure how we can ‘twist’ this order to create a new superconductor. Working directly with theorists helps us find ways to understand them further.”

Superconductors, which physicists have been studying for about a century, work at very low temperatures, which is a challenge to their practical use. In the past 30 years or so, physicists have found some materials that are superconductors at somewhat higher temperatures. If scientists can find a “room-temperature” superconductor, it would be a tremendous breakthrough for the electric grid and electronic devices of all kinds. That sort of technology could save billions of dollars in energy costs, Aynajian says.

Aynajian, who joined Binghamton’s faculty in 2013, began studying superconductors in graduate school and continued working with them during a post-doctoral fellowship at Princeton University. He credits Bernhard Keimer, his graduate school mentor at Germany’s Max Planck Institute for Solid State Research, with bringing him into the field.

The CAREER award will give Aynajian an opportunity to do some mentoring of his own, both with his graduate students and with children in Greater Binghamton. He plans to develop hands-on experiments and playful activities with superconductors, including a mini magnetic-levitation train, to inspire area students and offer some exposure to ideas in physics.

As for the experimental aspect of the project, he’s optimistic. “No matter what we find,” he says, “it will be interesting.”