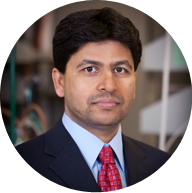 A Binghamton researcher whose work aims to create an alternative to traditional, silicon-based solar cells has won the National Science Foundation’s most prestigious grant for early-career faculty.

Tara P. Dhakal, an assistant professor of electrical and computer engineering, was awarded a five-year, $500,000 NSF CAREER grant for his study “Toward Twenty Year Lifetime: Hermetic Sealing for Perovskite Solar Cells.” The proposal was one of just 11 to be funded in a field of 150 proposals.

“Most solar cells are made from silicon and, while those solar cells are highly efficient, they have their limitations,” says Dhakal, who also serves as interim director of Binghamton’s Center for Autonomous Solar Power.

His work focuses on solar cells made with perovskite, a crystalline mineral found in nature that has shown the potential to create solar cells that are just as efficient as the silicon-based type.

“Germanium and lead both come from column 14 on the periodic table,” Dhakal says. “Other researchers have tried, without success, to use tin for the same reason but I’ve found evidence that germanium has a better chance of success.”

If he is able to replace the lead in the perovskite solar cells, they could prove to be more environmentally friendly than other solar cells.

However, even with the lead removed, there is another issue that could prevent perovskite solar cells from being deployed for an extended period of time.

“Lead perovskite solar cells have only lasted for several months under ideal laboratory conditions,” he says. “With my proposed sealing techniques, I predict that module lifetimes could be greater than 20 years.”

With Dhakal’s seal on the perovskite solar cells, they could have the same shelf life that silicon solar cells do. Without lead and with this sealing, the cells will become more practical for use — which Dhakal says will facilitate a wider reach for solar power.

“Silicon makes a robust solar cell but one thing it misses is flexibility,” he says. “The perovskite solar cells could be made on fabrics or plastics, which would make solar power much more accessible.”

Dhakal, who did his undergraduate work in Nepal, came to Binghamton as a research scientist in 2010 after earning a doctorate at the University of Florida.