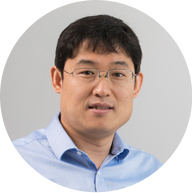 Surgical removal of brain tumors may become easier and more precise, thanks to Binghamton University research that recently received funding from the National Institutes of Health.

A three-year, $750,000 R00 grant from the National Institute of Biomedical Imaging and Bioengineering (NIBIB) supports his research at Binghamton.

Cancer cells are denser than normal cells, which helps them to be identified. Modern procedures involve a pathologist standing by for intraoperative consultation, using neuronavigation systems (such as an MRI scan) or fluorescence imaging to detect lingering cancer cells. Each of these techniques has drawbacks:

Lu’s technology is label-free, rapid and detailed. He expects that in the future, SRS can be used to evaluate 20-30 tissue samples during surgery to help delineate the tumor margin.

SRS detects “molecular fingerprints” by exciting the chemical bonds in molecules and reading the frequencies emitted by the vibrational states of the bond. This information is then used to assign different colors to the molecules, allowing for a detailed image.

Lu has also improved SRS so that it can create images of lipids, fatty acids that he says are important markers for the presence of cancer cells. Axons, the long, thread-like sections of nerve cells, are wrapped in lipid layers called myelin sheath. In areas affected by cancer, they break down, leaving lipid droplets that can be easily detected by Lu’s technology.

Lu envisions the technology being incorporated into a machine for operating rooms, and he is debating two options: a handheld probe to create images of the internal cavity, or a device that creates images of tissue samples from multiple locations. “We are providing a tool that is complementary to the current neuronavigation system,” he says.

The next step is to collect more data to solidify the efficiency of the technology. Lu is collaborating with SUNY Upstate Medical University and Brigham and Women’s Hospital to get larger data sets.

Eventually, Lu would like to implement machine learning into the technology for faster and more efficient diagnosis. He also hopes to apply this technology to other types of cancer diagnosis and even other neurological diseases, including Alzheimer’s, and do more work in live cell imaging.

Before joining Binghamton’s faculty in 2017, Lu completed a post-doctoral fellowship at Brigham and Women’s Hospital and Harvard Medical School, where he collaborated with cancer pathologists, surgeons and researchers to transform this technology. He also secured a prestigious NIH K99 Pathway to Independence Award, which is designed to facilitate researchers’ transitions from post-doctoral work to independent tenure-track jobs.

“Everyone contributes to the technical development of this technology, [but] Frank’s definitely the driving force behind the work,” says Sandro Santagata, a neuropathologist and assistant professor at Harvard Medical School and Lu’s post-doc collaborator. “He’s a team player, which is very important in scientific research.”

As a kid, Lu was always tinkering, even attempting to develop a FM radio and an electric generator. Ever since, he has been on course to create innovations that would benefit society.

“To be successful in science requires a pretty remarkable drive,” Santagata says, “and he’s got it.”