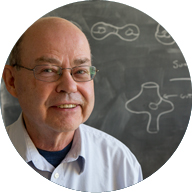 For Thomas Farrell’s birthday, his friends and colleagues organized a birthday bash on the Greek island of Samos, where Pythagoras was born. Dozens of mathematicians from all around the world flocked to the conference to talk discuss geometry and topology and to relax on the beach. “It’s really just an excuse to throw a party,” jokes Farrell, a Binghamton University mathematician who celebrated his 70th birthday this year.

Birthday conferences are a longstanding tradition in mathematics, but they’re not thrown for everybody, says Jim Davis, a mathematician from Indiana University. Farrell received this special honor, Davis says, because his work revolutionized the field of topology — an area of mathematics that explores the deformation of theoretical geometric objects.

Farrell is famous for formulating a theory with Stony Brook University mathematician Lowell Jones that came to be known as the Farrell-Jones Conjecture. The research began while Farrell studied at Yale in the 1960s. “My advisor suggested a couple of problems to work on, but then a few months later, he told me they’d been solved already by this person named Borel,” Farrell explains. “After this happened a few times, my advisor told me to go down to Princeton and ask Borel to suggest a problem for me to solve.” The problem he was assigned became known as the Borel Conjecture. “It’s what I’ve been working on for most of my life,” Farrell says.

The Borel Conjecture deals with geometric objects called manifolds, which often look like twisted ribbons or hollowed-out pretzels. Mathematicians who study manifolds have abstract ideas about shape. For example, you probably wouldn’t say that an egg and a sphere are the same shape, but in topology they’re thought of as homeomorphic: the points along their surfaces are arranged in a similar order. “There’s a saying that topologists don’t know the difference between a doughnut and a coffee mug,” Davis says. “The mug has a hole in the handle, so if it was made of clay, you could mold the mug into a doughnut.” But you can’t reshape an egg into a doughnut without tearing or gluing its surfaces, so those two objects are not homeomorphic.

What Armond Borel proposed was that if two manifolds have the same number of holes and a negatively curved surface (like the side of a nuclear power plant’s tower), then the manifolds would be homeomorphic — their points have a one-to-one correspondence. Some researchers disagreed with the conjecture. In 1988, after 21 years of puzzle-solving, Farrell and Jones were able to prove those dissenters wrong for most examples.

“Farrell, together with his advisor Wu-Chung Hsiang and later with Jones, did the most important work in proving this conjecture in many cases,” Davis says. “Farrell has said that in the beginning, some of the results were so surprising that even he didn’t believe it. It took a while for people to really understand it.”

Davis says the Farrell-Jones Conjecture is a theoretical tool that has few real-world applications at this time.  But “when Einstein came along and needed mathematical tools for Theory of Relativity, he needed abstract differential geometry. The math developed 60 years earlier by (Bernhard) Riemann gave him a tool to use. So you never know! There’s a bunch of reasons why people like Tom and I can justify spending our lives doing mathematics. It can sometimes be influential, but the main thing is the sheer beauty in it.”