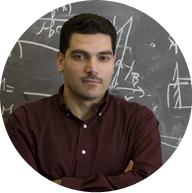 For years scientists have known that tiny parts within tiny chips vibrate, and those vibrations, triggered by motion stopping or starting, can in turn trigger an action. But just as mothers know chicken soup works for a cold — without understanding the science behind it — engineers are still studying why these tiny vibrations occur, and how to harness them.

Mohammad Younis has worked for years to understand the vibrations and mechanics of these miniscule micro-electro-mechanical systems, known as MEMS. The work paid off late last year, when Younis, an assistant professor of mechanical engineering at Binghamton, received his first patent.

The patent is for a MEMS device that would detect acceleration and mechanical shock. The device, he said, would be able to recognize when something crashed with a high level of force and then perform a desirable task. Applications range from protecting the hard disk of a laptop computer to deploying a side-impact air bag.

“This invention represents a revolutionary concept that provides a potentially low-cost, reliable and manufacturable solution for electronic shock sensors, which could be embedded in packages and products to detect abuse, and possibly protect sensitive components from damage,” said Steven M. Hoffberg, the lawyer who worked on Younis’ patent application and a partner with the firm Milde & Hoffberg of White Plains, N.Y.

Younis is working on other inventions as well. He has another patent pending on a similar device that would detect a lower level of acceleration. That innovation could prove useful in gas drilling, navigation systems and even earthquake detection.

He’s also interested in using MEMS to build a detection system for dangerous materials such as TNT vapor and anthrax. Younis and his collaborators, including chemistry Professor Omowunmi Sadik, propose to explore placing a sponge-like substance on a chip that would trigger a response when certain particles are captured. The MEMS would react to the chemicals much like other systems would react to an impact. It would trigger the mechanism to respond, in this case as part of a warning system.

Younis’ work combines materials and chemical engineering with physics. He believes that knowing how to control the vibrations will lead to better uses of the chips — faster air bags, more accurate seismic readings or scores of other uses no one has thought of yet.

“It’s like the invention of airplanes,” Younis said. “The Wright brothers made their plane. But without understanding the laws of physics and the airplane and aerodynamics, we would not have the planes we have today.”

“It’s sort of the same,” he said of MEMS. “People fabricated MEMS, and then there was a lag between understanding the physics and the fabrication.”

Younis’ interest in math and science was piqued as a child. He studied mechanical engineering at the Jordan University of Science and Technology in Irbid, Jordan, and came to the United States for his master’s and doctoral degrees at Virginia Tech.

It was there that Younis first discovered MEMS. He said the interdisciplinary nature of the study intrigued him. “You need to know mechanical and electrical engineering,” he said. “You need to know, for example, about solid mechanics, electricity, so it’s what I call multi-physics. … I’m trying to tackle those disciplines — thermal, fluid, electrical, you name it.”

The MEMS and Nanotechnology Exchange defines MEMS as “the integration of mechanical elements, sensors, actuators and electronics on a common silicon substrate through microfabrication technology.”

Sensors gather physical data, which is processed by the chips’ electronics and, through some decision-making capability, directs a response.

Take, for example, MEMS uses for air bags in cars. Vehicles have a complicated system that triggers the deployment of the safety device. Younis’ work takes the sensor mechanism a step further, suggesting that car companies could build a single device, using MEMS technology, that would sense the change in acceleration and trigger the air bag.

The MEMS components could be programmed to expect certain velocities. But an impact that halts a high velocity, such as a crash, could interrupt the MEMS system. That interruption could cause the chip to trigger an air bag.

A single device that could serve as both sensor and trigger would be cheaper to fabricate than a system that requires several parts. The technology could be used to protect electronics such as cell phones, preventing damage when they are dropped, Younis said. Or it could help govern major systems such as missile defense to prevent accidental deployment.

Miles has worked with Younis since Younis joined the faculty in 2004. Younis’ grasp of theoretical mathematics and practical knowledge of dynamics offer a new perspective on the field, Miles said.

“He’s really working hard to take that stuff and figure out how to work that into practical devices,” Miles said.  “He’s able to have a very deep understanding of mechanics. That combination is something that not everybody has.”