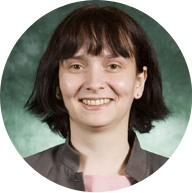 A Binghamton physicist has received nearly $400,000 in grants to investigate optical properties of new materials.

Oana Malis, an assistant professor in the Department of Physics, Applied Physics and Astronomy, won a three-year, $300,000 grant from the National Science Foundation as well as a Cottrell College Science Award of $44,244 from the Research Corporation and about $42,000 in funding through the University’s Integrated Electronics Engineering Center.

Malis, who’s also associated with the Materials Science and Engineering Program, is particularly interested in the optical properties of gallium nitride, a compound semiconductor material. “I’m looking for new materials that would allow us to generate light in ranges that are not currently accessible,” she said.

What does that mean? Think of a laser pointer. That’s a visible laser. “Technologically there’s interest in creating lasers that work at any wavelength,” Malis explained. “Why? Because these lasers could be used for sensing, to detect environmental conditions in a building, let’s say. There are defense applications as well.”

Malis is looking for new materials that would allow her to create lasers in the mid-infrared range, and nitrides could be the answer. Their optical and electronic properties are not well understood, in part because they’re difficult to make.

The devices in question are incredibly small, less than a millimeter square. The material is like a sandwich of very thin layers, each about a nanometer or two thick. These hundreds or even thousands of layers give nitrides an interesting electronic structure and allow them to emit or absorb light in particular ranges.

“This is an ambitious project,” Malis said. “It’s really the first few steps of the process. Getting to the device level, to an actual laser you can hold in your hand, is a little harder.”

She’s especially excited about this project because it will give undergraduate and graduate students experience in applied physics, including materials, advanced techniques such as electron microscopy and making devices and in theoretical modeling.

“Dr. Malis is a very promising faculty member in physics, and her research efforts could lead to exciting new developments in laser and sensor technology,” said Gerald Sonnenfeld, vice president for research. “Binghamton University congratulates her on her grant awards and wishes both Dr. Malis and her students, who will play a major role in the project, great success.”

Malis said she found “a bit of a disconnect” between what she learned in school and what she needed to know in the real world.

“I feel it’s important to involve students in applied research,” she said. “Physics students sometimes believe that physics is only about the cosmological level or broad strokes. In the end, physics is an experimental science. It has to do with reality, with the world around us.” Malis said she tries to encourage her students to think freely and creatively and see that research is more than just following a certain procedure. “I’m really interested in making things that work,” she said, “in understanding things that will make people’s lives better and will have a technological impact.”