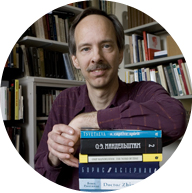 The fierce determination of several Russian poets who lived and wrote in the early 20th century provided the inspiration for a new book by Binghamton faculty member Donald Loewen.

Lexington Books recently published The Most Dangerous Art: Poetry, Politics, and Autobiography after the Russian Revolution by Loewen, an associate professor in the Department of German, Russian, and East Asian Languages.

Reading a short autobiographical fragment by the poet Osip Mandelstam sparked Loewen’s interest in the project, which eventually grew to include Boris  Pasternak and Marina Tsvetaeva.

“There was an incredible power in Mandelstam’s prose that had a different quality from what you see in his poetry,” Loewen said. “What he was doing was telling the story of the traumatic experiences he had for being a poet. It was the story of his life in literature. What I most admired about it was his determination not to give in. He was defending poetry to the death — while writing in prose.”

Mandelstam, Pasternak and Tsvetaeva, he said, all turned to prose to defend themselves as poets, poetry as a genre and the concept of the poet.

The three are among the greatest Russian poets of all time, and each paid dearly for his or her art: Mandelstam was eventually killed for a poem. Pasternak was essentially set aside as a poet. Tsvetaeva committed suicide.

“There was a tremendous human cost for what these poets were doing,” Loewen said.

These poets were basically driven out of poetry as a genre in terms of their ability to publish, he explained. Only a certain type of poetry could find its way into print in the late 1930s in the Soviet Union.

Each of the poets faced an inner battle between their artistic calling as poets and the demands of the state. And each came to a different conclusion about how to resolve that conflict, Loewen said.

Pasternak looked for ways to fit in without betraying his identity as a poet and thus received criticism from both sides. His goal was to bend but not break, to survive so he could “carry the torch of poetry” as far as possible, Loewen said.

Mandelstam was at times outspoken in his criticism of the government, which led to his imprisonment and then to his death. He saw himself as a “guerilla poet” in some ways, Loewen said. But even he found himself drawn toward the literary mainstream at times, torn between a desire to survive and a determination to resist as an artist.

Tsvetaeva fled to Paris, where she faced appalling poverty. Eventually she followed her husband and daughter back to the Soviet Union but soon realized that she was doomed to be an eternal cultural outsider. She took her own life during World War II.

“Seeing where they identified pressure points for themselves allowed me to plot the correlation between the cultural politics and the emotional intensity of the work,” Loewen said, noting the three wrote in a period of incredible turmoil.

While Mandelstam, Pasternak and Tsvetaeva’s life stories are well known to those who appreciate Russian poetry, Loewen may be the first to seek the common elements in their autobiographies and offer a broader vantage point on the times in which they lived.

Russia has a deeply ingrained appreciation for poetry and even a national sense of the poet as prophet, Loewen said. The government’s attempts to eliminate the free voice of the poet through limiting publication and public meetings was ultimately unsuccessful, in part because of poets’ courageous acts and in part because of Russians’ ability to memorize poems.

“The poetry cannot die because it survives in the memory and then in the retelling by people who have learned it by heart. In that sense, the texts are unnecessary because the people become this vast cultural repository.”