Study: School success may be contagious 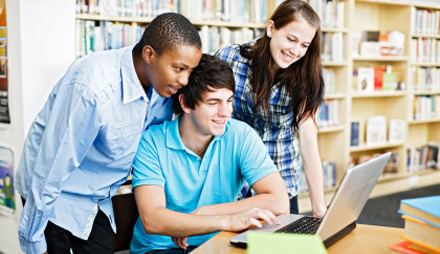 Good grades might be just as infectious as that dreaded case of strep throat making the rounds at your child’s school.

That’s according to a new Binghamton University study published this week in the open-access journal PLOS ONE.

Binghamton researcher Hiroki Sayama and four students at nearby Maine-Endwell High School in upstate New York, conducted a survey of the school’s junior class. The students were asked about their friendships, and the researchers constructed a series of social networks focusing on acquaintances, friends and best friends.

The student researchers obtained the GPAs of every student in the 160-member class and developed a hypothesis: Students whose friends had better grades than they did had a better chance of improving their academic performance than students whose friends weren’t doing as well in school.

In the second year of the study, the students ― then seniors — demonstrated that this was indeed the case. “If your friends had a higher GPA than yours,” Sayama said, “you have a better chance of improving your GPA — and vice versa.”

Sayama worked with the students as well as an administrator from the school district. The teenagers proposed the study idea and pursued it even when Sayama explained the challenges inherent in working with human subjects.

“They were so persistent,” he said. “This is their research. I helped with statistical analysis, but they chose the topic and conducted the surveys.” The students, Deanna Blansky, Christina Kavanaugh, Cara Boothroyd and Brianna Benson, are now in college and appear as lead authors on the peer-reviewed research publication, which was conducted with support from the National Science Foundation.

Sayama, a professor and a father, said the study’s findings surprised him. His colleague in the school district, however, seemed to take the results as confirmation of something she had long suspected. The student researchers, who noted that friends had a stronger influence on academic performance than acquaintances or best friends, suggest that the study offers a potential method of predicting student performance.

The scientific community has recently uncovered other examples of so-called “social contagion,” most recently studies showing that your friends’ weight as well as happiness may affect your own.

“Many things are communicated over social ties,” said Sayama, director of Binghamton’s Collective Dynamics of Complex Systems Research Group. “This is one of the first discoveries that shows social contagion might also be taking place in academic performance.”

Read the Binghamton study in PLOS ONE, an online, open-access, peer-reviewed journal.