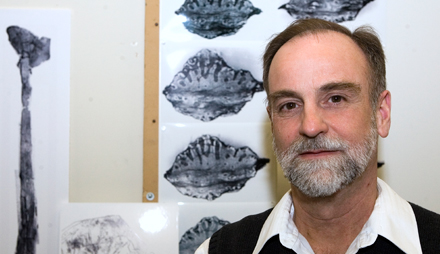 A Binghamton University scientist and his colleagues have reported the discovery of the floor of the world’s oldest forest in a cover article in the March 1 issue of Nature, a leading international journal of science.

“It was like discovering the botanical equivalent of dinosaur footprints,” said William Stein, associate professor of biological sciences at Binghamton, and one of the article’s authors. “But the most exciting part was finding out just how many different types of footprints there were. The newly uncovered area was preserved in such a way that we were literally able to walk among the trees, noting what kind they were, where they had stood and how big they had grown.”

The town of Gilboa in upstate New York is famous for being the location of some of the earliest tree fossils. But after a new round of excavation, scientists may gain new insight into the role of modern-day forests and their impact on climate change. 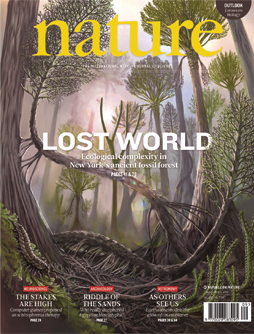 The Gilboa area has been a known tree fossil location since the late 1800s but during the 1920s, when construction of the Schoharie Dam revealed a dense stand of trees, paleontologists began to investigate the site in earnest. Named Eospermatopteris, or “ancient seed fern,” by Winifred Goldring of the New York State Museum in 1924, these earliest trees had survived only as broken standing bases and trunks, all around 1 to 3 feet high. But more detailed glimpses of the past emerged in 2004 and 2005 when Linda VanAller Hernick, paleontology collection manager, and Frank Mannolini, paleontology collection technician from the State Museum, uncovered more intact specimens, complete with crowns.

After investigation by Stein and Christopher M. Berry, a paleobotany lecturer at Cardiff University in Wales, the team determined that these trees resembled modern-day cycads or tree ferns but were not related to either one. Working in conjunction with Stein, Mannolini also developed a sketch of the ancient forest.

The research team got a huge break in spring 2010 when repairs of the Gilboa Dam reopened the site for another look. What they found this time was a large, substantially intact portion of the ancient forest horizon, complete with root systems. As they had expected, Eospermatopteris root systems of different sizes were the most abundant.  But what they didn’t expect to find was the level of detail of the overall composition of the forest. 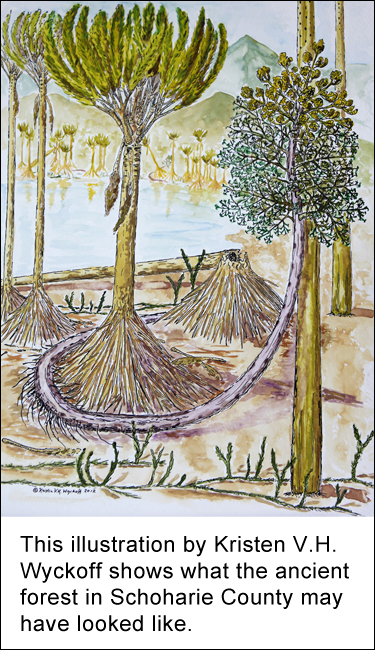 The first glimpse of the unexpected complexity of this ancient forest came when Stein, Hernick and Mannolini found the remains of large scrambling tree-sized plants, identified as aneurophytaleans. These plants were likely close ecological associates to the original trees, living among them on the forest floor like modern ferns, possibly scrambling into the forest canopy much as tropical vines do today.  The aneurophytes are the first in the fossil record to show true “wood” and the oldest known group in the lineage that lead to modern seed plants.

The team also came across a tree belonging to the class Lycopsida, or club mosses, which predates an earlier discovery made in Naples, N.Y., and an ecologically important group in the history of land plants. The lycopsids are an ancient group of non-seed plants represented today by low growing forms such as the “running pines” of the northern hardwood forests of New York. They also inhabited swamps and ended up being much of the Pennsylvanian coal we burn today.

So what exactly did this complex ancient forest in Gilboa look like? Stein and the team figure that the area probably enjoyed a wetland environment in a tropical climate. It was filled with large Eospermatopteris trees that resembled weedy, hollow, bamboo-like plants, with roots spreading out in all directions, allowing other plants to gain a foothold. Scrambling among these roots on the forest floor were aneurophytaleans, acting much like ferns do today, and possibly climbing into the forest canopy as vines. The lycopsids, although seemingly rare, may also have been very important in certain places although perhaps not yet as specialized inhabitants of swamps.

But what the research team believe is most important about this particular site is what it was doing to impact the rest of the planet. At the time the Gilboa forest began to emerge — around the Middle Devonian period, about 386 million years ago — Earth experienced a dramatic drop in global atmospheric carbon dioxide levels and the associated cooling led ultimately to a period of glaciation.

“Trees probably changed everything,” Stein said. “Not only did these emerging forests likely cause important changes in global patterns of sedimentation, but they may have triggered a major extinction in fossil records.”

For Stein, it all comes down to one thing: how much we don’t know but need to understand about our ancient past.

“The complexity of the Gilboa site can teach us a lot about the original assembly of our modern day ecosystems,” he said. “As we continue to understand the role of forests in modern global systems, and face potential climate change and deforestation on a global scale, these clues from the past may offer valuable lessons for managing our planet’s future.”

To read the team’s piece in Nature, click here.

Like this article? Please share!
biologyfossilstrees
0
The heart of the matter
‘Lucky’ numbers make for unlucky customers