Anthropologist turns to the alpaca 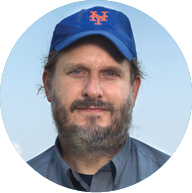 D. Andrew Merriwether ambles into his lab wearing a green T-shirt, a weathered Binghamton University ball cap and a graying ponytail. He ignores the birthday cake on the bench (chocolate frosting with peanut butter cups) and pulls up a stool.

He has been doing some fieldwork, he says. For this particular molecular anthropologist, that means he was actually in the field — with his alpaca.

He’s looking for genetic links that cause choanal atresia — a disorder found in both the alpaca and humans in which tissue or bone blocks nasal passages. It’s frequently fatal among the alpaca because babies with the condition can’t breathe while nursing.

Choanal atresia has perhaps 20 causes, Merriwether says. Only a couple may be genetic, but understanding the genetics may lead to strategies for prevention or early diagnosis in humans.

That’s a small part of how the alpaca play into his research. “They’re just so neat: curious, quick, smart,” he says. “They survive on almost nothing.”

As a species domesticated by early South American populations, they reflect the culture of the people about whom Merriwether did his dissertation 20 years ago. “For the poorest people of South America, it’s their only source of cash income,” he says. Like those people, Merriwether and his wife shear their alpaca herd.

Genetically, the alpaca had to adapt to life in the 13,000-foot altitudes of the Andes just as people did, says Professor Ralph Garruto, a National Academy of Sciences member whose presence at Binghamton drew Merriwether to the faculty in 2003. How they did that is a question with implications for cultures across the world.

“How do people who are genetically different adapt to the same stressors?” Garruto asks. Women in most parts of the world can’t carry a fetus to term above 10,000 feet, but the people of the Andes do it routinely — as do the alpaca. “All the changes in the alpaca help us see the mechanism in that animal and whether there are parallels in humans. We’re talking survivability and functionality of human beings.”

The alpaca aren’t Merriwether’s sole focus. About a third of his research lies in Melanesia, with the peoples of New Guinea and the Bismarck Archipelago. He has many of the same questions he had about the South American cultures that got him into molecular anthropology in the first place: How did they get there? How long ago? How have they adapted?

“Almost every question I am interested in,” he notes, “has DNA as a way of answering it.”