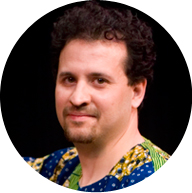 Ethnomusicologist James Burns traces his interest in world music back to the days when he was part of a band.

“One day a member gave me this book about a drummer who got interested in world drumming through meeting other people and studying their drumming culture,” Burns says. “That’s when I first saw the name ethnomusicology, and all the interests I had just clicked into one word that meant world culture, travel and music.”

Now a professor of ethnomusicology at Binghamton, Burns produces and distributes CDs of music from African countries such as Ghana, Togo, and Benin. His field work creates a positive image of Africa through music.

“What I want to do is bring traditional music out in a way that people can appreciate,” he says. “A lot of people have negative associations with Africa that they pick up from the media, whereas music portrays the best side of every culture.”

Since 2000, Burns has completed 15 CD projects.  One of the discs, from a dance-drumming group in Ghana titled “The soup which is sweet draws the chairs in closer,” is available on Amazon.

Burns also records music videos.  He says his most remarkable experience occurred while filming a religious ceremony. “The dancers wanted to perform a miracle by saying a prayer, while someone stuck their hands into a pot of boiling palm oil,” he says. “They asked me if I wanted to participate. On the video you see me afraid to do it, and then the priest grabs my hands and puts them into the oil. It felt like I stuck my hands in a bath of ice!”

Like this article? Please share!
africaInternationalmusic
0
Food provides insight into Korean culture
Training a critical eye on a British ideal