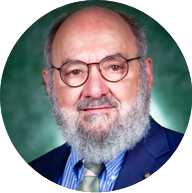 Many simulations these days — models of plate tectonics, for example — happen in a computer and without a human “in the loop.” Frank Cardullo’s work is different on both counts; he specializes in real-time simulations with human operators.

Cardullo, then a Link Simulation and Training employee, worked on the Apollo program and has decades of experience in simulation for flight and aerospace applications. Since joining Binghamton’s faculty in 1980, he has explored some of the underlying principles of simulation, including mathematical models and signal processing.

In recent years, flight and driving simulators have grown increasingly realistic, with significant improvements in motion cues. Cardullo notes that physiology and biology play a growing role in simulation, as do new ideas about cognition and learning.

“Simulators, I think, are creating better pilots,” he says. “They’re better able to handle complex situations.” Engine failure, like the problem in the 2009 so-called Miracle on the Hudson flight, is a prime example. Most pilots experience engine failure only in simulations. Nevertheless, they are often able to identify it and to respond appropriately because of that training.

Cardullo, a professor of mechanical engineering whose work has been supported by NASA as well as the Office of Naval Research and the Air Force Research Laboratory, earned his master’s degree from Binghamton. He sees applications for his work wherever he goes. A decade ago, he explored the possibility that data from simulators could be used to identify specific pilots, which could be useful in determining whether a pilot had been disabled or was impaired in some way. An avid Red Sox fan, he has also considered taking what he knows about brain waves to see whether they are the reason that some athletes respond faster than others to visual information. Perhaps, he says, there was some scientific truth behind the  “fast eyes” of the late Boston great Ted Williams.

Cardullo is also interested in medical applications of his field, especially in the idea that surgeons benefit from simulation training in much the same way pilots do. Simulators can present malfunctions and difficulties to doctors so that they can become more experienced in dealing with them. (Standard training now often relies on the use of pigs.) Cardullo hopes to build a simulator that would provide tactile sensation to surgeons.  “My hypothesis is that tactile feedback will improve the surgeon’s performance,” he says. Simulation technology may also lead to improvements in the design of surgical robots, Cardullo says, just as it has led to better aircraft.

He wants to examine the complications surrounding robotic surgery done remotely, including questions about satellite and phone connections. “The up-down time can be two seconds,”  he says.  “A lot of simulation research that I’ve done over the years is looking at the effect of that communication delay on human performance. Once you get over about 70 or 80 milliseconds of delay, it affects performance. You can’t have that if somebody’s cutting out someone’s liver.”