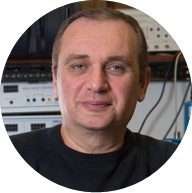 Imagine the batteries in your cell phone and laptop lasting 10 times longer than they do now. Imagine cost-efficient fuel cells powering your car while emitting no greenhouse gases. Imagine carcinogens being pulled out of the groundwater near your home.

Binghamton University chemist Nikolay Dimitrov imagines all of these things, and because of that they may someday be a reality for the rest of us. Dimitrov uses his expertise in electrochemistry, analytical chemistry and materials science to develop catalysts that he hopes will be sturdier and cheaper than existing options.

Take the lithium ion battery. This workhorse of the tech world powers products ranging from cell phones to electric vehicles. But it has basic limitations: Its capacity decreases so fast that even the best smartphones lose their juice in two days; its energy density pales in comparison to gasoline; and overcharging can lead to instability and, in the worst cases, fires.

Dimitrov contributes to that future by developing the fundamental catalysts from which those batteries (and many other things) could someday be built.

A paper he co-authored in Nature in 2001, which first introduced to a broader audience de-alloying, a key process to his approach, has been cited more than 1,000 times. Dimitrov, an associate professor of chemistry and materials science, has brought $1.5 million dollars in research funding to Binghamton since joining the faculty a decade ago. His National Science Foundation support includes a $300,000 award this year and a 2008 CAREER Award. (That’s the most prestigious federal grant for young faculty.)

“The NSF wants to make sure that we can control key fundamental aspects of this process so we can move to practical application in a more confident way,” Dimitrov said.

Most catalysts are now made using nanoparticles. They’re handy and versatile little objects, but controlling them is difficult and results in substantial losses.

Dimitrov’s method, on the other hand, involves electrochemically depositing an alloy of readily mixed metals, such as silver and gold, then selectively removing the less noble one (in that case, silver), to leave a noble, three-dimensional porous structure that’s ultra-thin, uniform and beautifully interconnected. This structure can then be customized with a variety of coatings with specific catalytic activity.

“We control the current, and by running it for a specific time, we get a charge that accounts for every atom deposited on the surface,” Dimitrov said.

Radoslav Adzic, a senior chemist at Brookhaven National Laboratory and leading researcher in fuel cell catalysis, says Dimitrov’s work on fundamental questions in electrochemistry has made significant contributions to their field.

“His recent work developing catalysts for energy applications is the subject of enormous importance for achieving goals of clean energy and a clean environment,” Adzic said. “His methodical approach and ability to identify key issues produces publications that will help in reaching these goals in the near future.”