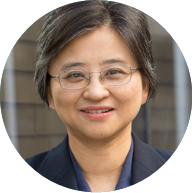 On Aug. 14, 2003, something went very, very wrong in Ohio. Tree branches hit a transmission line during a hot summer afternoon when power demands were high to feed air conditioners.

A software problem meant human operators were unaware they needed to shunt power around the break. Then they couldn’t keep up with relays commanding to break circuits to prevent overloads. Grid by grid, community by community, the cascading power failure shut down the Northeast United States and much of Ontario, Canada.

Fifty-five million people were left without power, and lost productivity and damaged equipment cost between $6 billion and $12 billion.

Eva Wu’s task is to help prevent that from happening again.

Wu, an expert in control systems and a professor of electrical and computer engineering at Binghamton University, is working with New York State Electric & Gas Corp. to understand the best way to monitor and control a power grid that is too complex for current automated equipment to control and sometimes operates too fast for much human intervention.

The federal government has spent $300 million since 2003 to add 1,000 new monitoring devices that are networked and time-synchronized with GPS. Power controllers get system-wide updates 60 times a second, rather than once every five seconds. This also provides the opportunity to make the fast-acting protection system more reliable. “One of the major reliability problems is protection system misoperation,” Wu says.

Current protection systems are designed to protect local equipment, not the entire network. Nothing watching the whole system is capable of making a decision in tenths of milliseconds, which some problems require.

Blink once. Some actions need to be taken 800 times faster than that.

“Part of my research is to make the best use of that information in an automated manner,” Wu says. That means both deciding how to place monitors to greatest effectiveness and how to design a control system that can cost-effectively mitigate the blackout of the power grid, beyond merely protecting local equipment.

To do that, she must measure two concepts: security profile, the ability of the system to respond to a disturbance in a timely manner; and control effectiveness, measuring both how well the system can be observed and how well it can be controlled.

The New York State Energy Research and Development Authority funds Wu’s research. “We certainly are interested in projects that enhance the reliability of the network,” NYSERDA spokeswoman Dayle Zatlin says.

This research has worldwide implications. Sixty million people in Brazil and Paraguay lost power in a cascade failure in 2009. In 2012, the largest blackout in history hit India, cutting power to 620 million people — twice the U.S. population.

“Control systems enabled by new smart devices have the ability to make the system act in a very robust way,” Wu says. “Obviously, we need to do better.”

Like this article? Please share!
control systemsenergyengineeringinventorpower grid
0
Q&A: The ‘dark side’ at work
Chemist contributes to 'green' technology