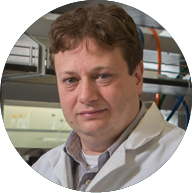 In photographs, California’s Mono Lake looks breathtakingly beautiful, with limestone formations rising from the bright blue water, surrounded by forest and snow-capped mountains. What makes the site important to Thomas Kulp is harder to see: the minerals that make the lake three times saltier than the ocean, the high concentrations of arsenic and the microorganisms that feed on that arsenic.

“It’s one of the more extreme environments that I work on,” says Kulp, an assistant professor of geological sciences at Binghamton University since 2011. “Mono Lake has a pH of 9.7, and it’s so full of dissolved minerals that when you stick your hand in the water, it feels soapy. It’s a closed basin lake, so water flows in from the Sierras, but the only way it leaves is through evaporation, which concentrates all these metalloids in the basin. It’s a naturally arsenic-rich ecosystem that supports a very healthy population of bacteria.”

For years, scientists have known about bacteria that survive without oxygen, getting their energy by metabolizing compounds such as sulfate, nitrate and iron oxides. Kulp has pushed that knowledge further, studying the biogeochemical cycles of arsenic and antimony for a clearer understanding of microbiologically mediated reactions and their broader implications.

“I like the idea of discovering new ways life can exist that we didn’t realize before,” says Kulp, who came to Binghamton after years as a research microbiologist for the U.S. Geological Survey. “That’s the most exciting part, and a fair amount of my work has been funded by NASA, which is interested in ways life can exist outside the usual metabolic processes. So I study a lot of bacteria, not just in environmentally relevant aquifers and fresh-water ecosystems, but in some of the more extreme environments on Earth, places where there aren’t a lot of things that can survive.”

Along with his research at Mono Lake, Kulp’s work has taken him to arsenic-contaminated aquifers in Taiwan and California and the Stibnite Mine in central Idaho. That has become the main site for his current work, breaking ground in the study of bacteria that use antimony compounds in place of oxygen.

“There are some scientists who wave a flag to say, ‘Hey, look at me,’” says John F. Stolz, director of the Center for Environmental Research and Education at Duquesne University. “Tom doesn’t do that. He’s quiet, unassuming, meticulous and very attentive to detail. But he does great science, and he’s contributing some very significant findings about life on Earth — and maybe even beyond.”