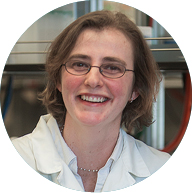 Persister cells aren’t naturally resistant to antibiotics, but by entering a dormant state and waiting until the medicine wears off, they’re able to start a new colony and produce a new infection. That’s why some diseases are so hard to shake, biologist Claudia Marques explains.

In her work with Binghamton colleague David Davies, Marques studied the formation of multispecies communities of bacteria called biofilms. The team succeeded in identifying a molecule that signals these colonies to disperse, making the microbes easier to kill with antibiotics. Those findings have been cited more than a hundred times.

“When you take antibiotics, you are only targeting the cells that are creating your symptoms,” says Marques, who came to Binghamton as a post-doctoral researcher in 2004 and is now an assistant professor of biology. “But there are other kinds of cells within the biofilm, and because they live in community, they’re much more protected than the cells that were killed. In theory, if you take an antibiotic in combination with something that will wake these dormant cells, you’ll treat your infection much more efficiently.”

If the Binghamton researchers are right, their discovery could have a significant impact in treating diseases that begin with biofilms, including tuberculosis, sinusitis and urinary tract infections.

“Claudia’s focus on waking the cells is what makes her work so good,” says Thomas K. Wood, endowed biotechnology chair at Pennsylvania State University. “She understands how things happen at the molecular level, and her work is important because it puts the emphasis on the right place, which is in trying to get rid of bacteria that are asleep.”

Marques was born in Angola and grew up in Portugal, where she received her bachelor’s degree before pursuing a master’s in medical microbiology from the University of London and a doctorate from the University of the West of England. Now living on her third continent, she’s starting to feel at home again, and has begun collaborating with researchers in electrical engineering and bioengineering, creating infections to study how different species interact within a single biofilm community.

“The possibility of treating patients better and improving their lives, that’s what excites me about this work,” Marques says. “That’s what got me into this work: to improve the health of the overall population.”