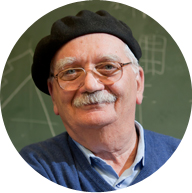 Many of Shelley Zacks’ most influential findings have arisen out of a need to address real-world problems — how to track inventory, aiding the military in “seeing” an enemy in blind situations, training IBM engineers in basic statistical quality control and helping doctors treat cancer.

“Some mathematicians like to work on abstract things — they don’t care whether it is applicable or not,” Zacks says. “Usually what I like is to get a good applied problem and try to develop the mathematics around it. A model should not be built around some mathematical analysis just for the sake of doing mathematics alone.”

This interest in addressing real-world problems started right after he earned his bachelor’s degree in 1955 from Hebrew University of Jerusalem and began helping scientists at the Research Council of Israel understand their data using statistical methods.

“I loved those opportunities to work directly with scientists,” he says. “They were not working on routine problems and, hence, any conventional analysis was rarely appropriate.” So, to move the experiments forward, he had to be innovative, developing his own theories and methods.

Zacks kept his eye on the applicable during several appointments throughout the 1960s and ’70s. In 1976, because of his work on survival probabilities for particle crossing, a field having absorption points, a scientist at the White Sands Missile Range called to ask if he could apply his research to crossing minefields. Zacks said yes, and the collaboration lasted 10 years.

The research expanded as he worked with the Office of Naval Research and the U.S. Army Research Office to understand blind spots in other theaters as well. A big challenge facing submarines is icebergs obscuring much of the North Sea. Armies have a tough time fighting in forests because there are so many random variables that hide the target — the number of trees, tree width, enemy movement, ally movement, heaviness of foliage, etc. Put simply, Zacks helped the military figure out the probabilities of how much of the enemy could be seen and how much couldn’t.

While conducting that research, Zacks landed at Binghamton University in 1980, right when the mathematics academy was debating how mathematics could, or should, address the needs of private industry, which was clamoring for practical applications. Zacks revealed his position by establishing Binghamton University’s Center for Statistics to train IBM engineers in basic statistical quality control, reliability and design of experiments.

He worked with a colleague in the Thomas J. Watson School of Engineering and Applied Science to create simulations that ran on IBM’s first generation of PCs, which were used during seminars for the engineers. Later, other companies joined, including General Electric, Universal Instruments and Dupont, and Zacks partnered with them on several research projects.

At about the same time, he started working with a biostatistician at the Medical Center at Charleston, S.C., to develop cancer treatment experiments that would yield the best-quality data possible. Later, the design became more and more sophisticated as he worked with researchers at Philadelphia’s Fox Chase Cancer Center.

“We developed the methodology that tells them how to do the research — how many patients to take, how to randomize the patients, how long to do the trial,” Zacks says. “Basically, we are building the framework for the experiments. The question is, when they start getting results from the patients and see how they react, how do you incorporate these results into the theoretical framework so that it will tell them how to continue their research?”

Zacks, who was named a distinguished professor by the State University of New York last year, doesn’t maintain the editing load he used to (at one point he was the editor or on the editorial board of five scholarly journals simultaneously), but he’s still teaching and researching. Most recently, he has looked at distributions of stopping times, which has a wide range of applications, from telecommunications and computer servers to coffeehouse staffing and hospital wait times.