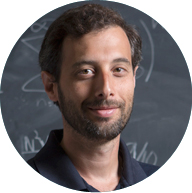 A Binghamton University physicist’s experiments may one day lead to sophisticated sensors that are able to detect small amounts of dangerous materials rapidly.

“You can picture it like spaghetti being sucked through a straw,” he says.

A nanotube is a cylinder made from a sheet of carbon that’s just one atom thick. Fluids travel through these tiny tubes differently than they do through a large pipe, though scientists don’t know exactly why. Some experts hope that nanotubes will lead to a next-generation method of sequencing DNA. Nanotubes may also help scientists understand some aspects of how small molecules are transported into cells.

Levy has developed a way to study one carbon nanotube at a time. Other labs study thousands at once, or use electrical observations of how DNA moves through nanotubes. Levy’s team has developed a way to conduct electrical, optical and fluorescent observations of single-stranded DNA molecules at the same time. His lab has also pioneered a fabrication technique that makes it possible to integrate carbon nanotubes within small fluidic channels.

Today Levy draws on principles from physics, biology, chemistry and materials science in his research. He’s particularly interested in how DNA, the genetic material found in nearly all living things, travels through these nanotubes. The information in DNA can be thought of as a code of four chemical bases. These four bases pair up in different combinations. Some combinations — or “markers” — are unique to certain animals or molecules and can be used to identify them.

Levy’s research could enable the electrical detection of particular molecules. For instance, a sensor at a post office could be programmed to search for a specific DNA marker. “If you can read where that marker is, it’s almost like a bar code,” Levy says. “You don’t want to sequence every piece of schmutz that goes through there because it takes a long time and it’s fairly expensive. But if you have a quick way of identifying a dangerous molecule, that’s valuable.”